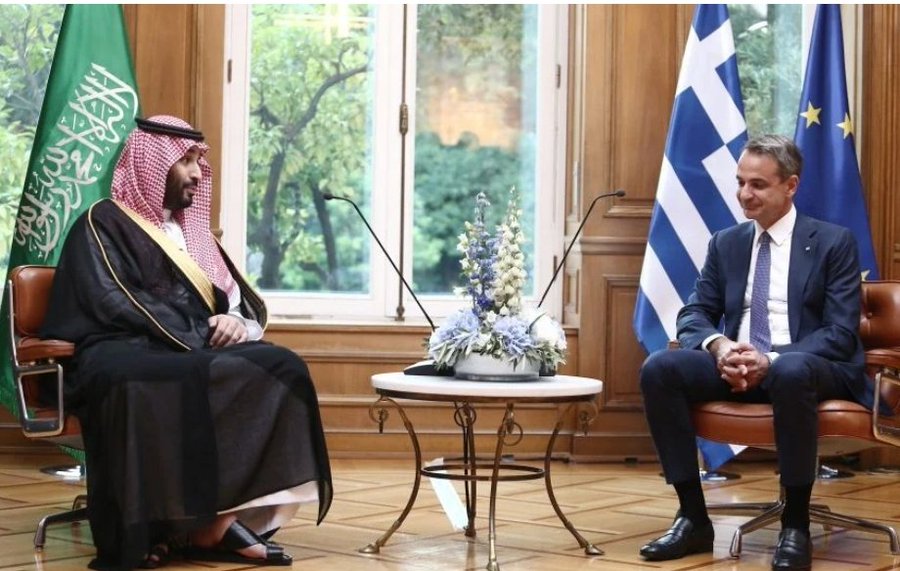 For his first visit to a European country after the brutal murder of prominent Saudi Arabian journalist and dissident, Jamal Khashoggi in Istanbul in October 2018, the Crown Prince Mohammed bin Salman choose Greece. Or the investment hungry Greece choose him.

For four years, no European leader would accept to be on the same picture with Salman. Jamal Khashoggi, a sharp critic of the King and the Crown Prince of the Saudi Arabian kingdom, was assassinated at the Saudi consulate in Istanbul on 2 October 2018 by agents of the Saudi government, allegedly at the behest of Crown Prince Mohammed bin Salman.

Salman was – and maybe still is? – diplomatically isolated.

But the Greek Prime Minister did not have a problem with this. Kyriakos Mitsotakis welcomed the Crown Prince in his office, they talked business and deepening the mutual relations, they walked together to the Acropolis.

According to government sources, the meeting between PM Mitsotakis and Crown Price Salman  took place in a good atmosphere, indicative of the strong interest of both sides in further deepening the already close bilateral relations and expanding the dynamically developing Greek-Saudi cooperation, which was also confirmed during Mitsotakis’ visit in Riyadh, in October 2021.

The two leaders signed an agreement setting up a Supreme Strategic Cooperation Council, which consolidates the strategic relationship of the two countries and the promotion of bilateral cooperation in all areas of mutual interest.

The Crown Price arrived on Tuesday, on Wednesday the private and state companies from both sides signed The signing of 16 business agreements and cooperation memoranda between Greece and Saudi Arabia worth some 4 billion euros. 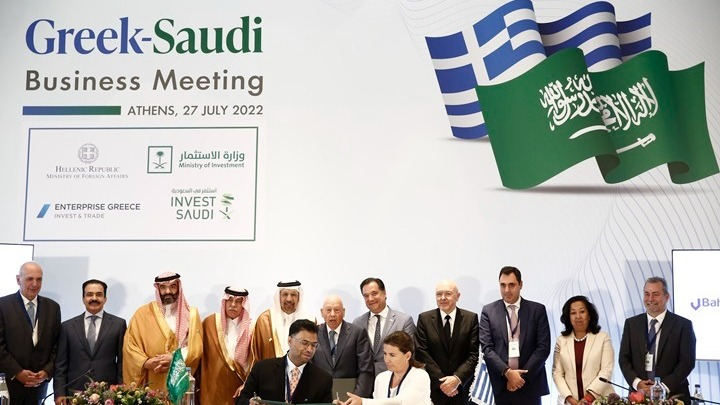 Over 100 Greek and nearly 40 Saudi businesses met in Athens and signer 16 agreements concerning the sectors of energy, shipping, aquaculture, waste management, construction and defense technology, and also foods and agri-food, as well as culture.

The most iportant among the agreements signed was one for the construction of a submerged cable system to transfer data, worth nearly 1 billion euros (3.75 billion SAR), called East to Med Data Corridor (the EMC project), and one for energy that covers conventional and renewal energy sources worth 2.6 billion euros

The signatures signal “a special moment in Greece’s relationship with Saudi Arabia,” said Deputy Foreign Affairs Minister for Economic Diplomacy & Openness Kostas Fragogiannis on Wednesday. He added “this is undoubtedly a success and encouraging in that we are moving in the right direction.”

PS Yes, what about Khashoggi? What about human rights and excecutions? What about the war in Yemen? We do it the American-way: when money talks, we turn a blind eye – or two.