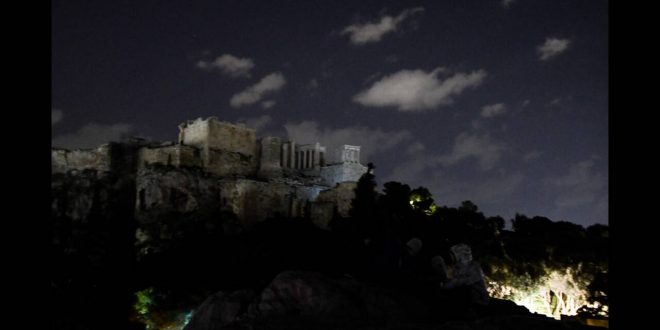 Greece’s government is getting ready for the worst energy scenario and plans to cut on natural gas consumption with darker streets and historical monuments as well as with rolling power outages for the households. This was announced by both the Energy minister Kostas Skrekas and deputy Finance minister Thodoros  Skylakakis over the weekend.

Skyalakakis told Skai TV, that we are closer to the worst scenario that of cutting Russian natural gas to Europe.

After this summer, it is highly likely that streets could become a little darker, historical monuments no longer bathed in artificial light throughout the night and households could face periodic outages, Skrekas told newspaper kathimerini.

The minister said that the measures described above are necessary if Europe is to cut its consumption of natural gas by 15% and could be needed, anyway, if Russia is to cut off natural gas supplies to Europe.

Before households are directly affected, municipalities will have to take the lamps out of 10% of their street lights and switch off lighting on monuments at 3 a.m.

Initially, the measures will be voluntary, but could become mandatory if not enough local authorities volunteer, Skrekas said.

“We must all understand that we cannot behave as if nothing’s happening around us,” the minister said. “There is a war that is destroying a country and is also feeding an energy crisis the likes of which we have never seen… we must all realize we cannot waste energy,” he said.

An extensive campaign to urge households to cut their energy consumption will take place. “Of course, the measure of last resort is an imposed consumption cut on household consumers through rolling blackouts… we cannot exclude anything.”

The government plans to support industries through these lean times, whether the European Union approves a support mechanism, as the government has requested, or not. But, in anticipation of the difficulties, industries have started to change the mix of fuels they use.

Consumption of natural gas by such companies in the first half of 2022 dropped 71.06% compared to the same period last year, to 1.67 terawatt-hours, and now natural gas accounts for only 5.51% of Greek industry’s fuel consumption.

Energy needs will be partially met by an increase in the production of lignite, or brown coal, a highly polluting source which Greece was supposed to be phasing out.

Public Power Corporation has been asked to more than double its electricity production. This will mean, first of all, the suspension of the phasing out of lignite for two or maybe three years and an immediate increase in production.

Skrekas explains that lignite would again become more important even without the mandated consumption cuts, as global energy prices have soared. “The need to cut the use of natural gas arises first of all from the fact that we import all of it,” he says.

Note that just ten days ago, Russia added Greece to the list of “unfriendly countries.”
*thumbnail: Acropolis in the dark during Earth Hour