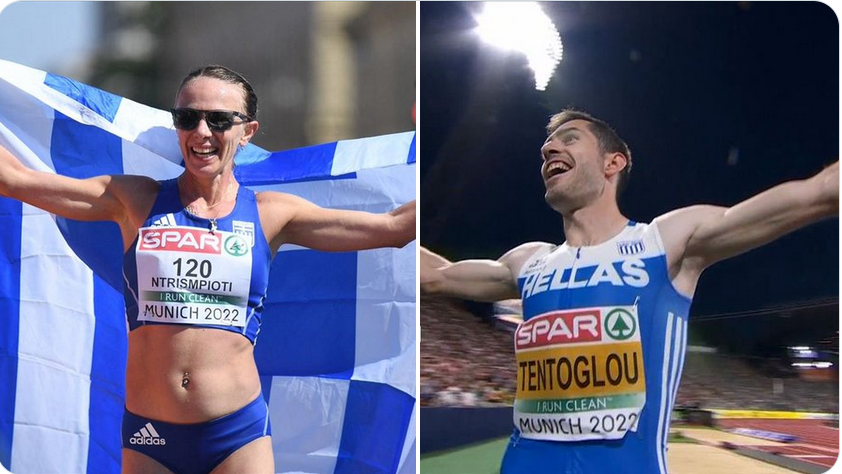 Antigoni Ntrismpioti triumphs in the first ever staging of the 35km race walk in #Munich2022! 🥇 #BackToTheRoofs pic.twitter.com/z23LMZCfVs

“I believe that every long jumper should have the nine meters in mind, of course, I have it in mine too. Very difficult, I want half a meter more, I will always try to get closer,” Tentoglou told reporters.

Antigoni Ntrismpioti triumphs in the first ever staging of the 35km race walk in #Munich2022! 🥇 #BackToTheRoofs pic.twitter.com/z23LMZCfVs

A few hours earlier, Antigoni Ntrismpioti had won a gold medal at Women’s 35km Race Walk She won the first gold at the EC Munich 2022 for Greece.

The 38-year-old Greek champion finished in 2 hours 46 minutes and 58 seconds to be crowned European champion. She finished ahead of Spain’s Raquel Gonzalez and Viktoria Madarasz of Hungary, who led for a long period in the race.

“I was actually talking to my husband, who was following the race on a scooter,” Ntrismpioti said later. “I told him I was confident. I said: ‘Don’t worry. I have it.”

Ntrismpioti was placed 8th at the 20-km walk race at the Tokyo Olympics. The Greek Olympic Committe excluded her from scholarships due to age criteria. The athlete was working at her parents’ tavern in northern Greece and she would train after a long shift in the early morning hours of each day.

Now she is the Queen!