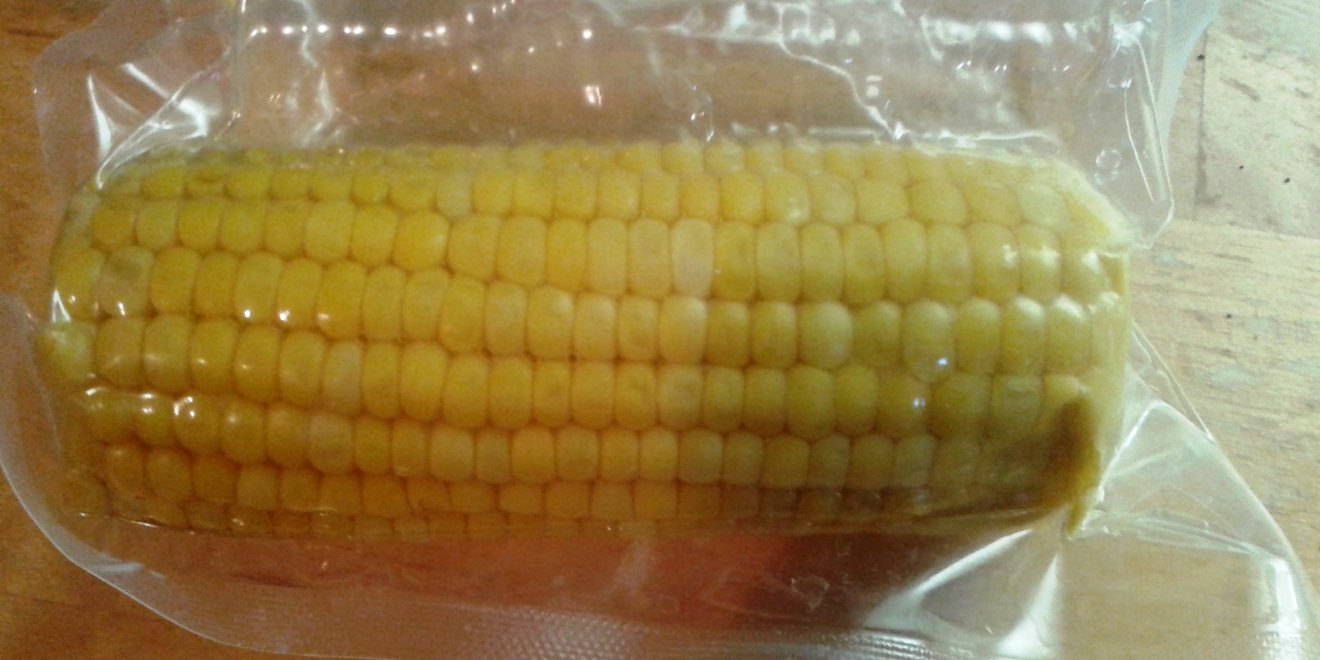 I have been literally frustrated by shrinkflation, spending more and more money to buy less product. And I was shocked over the weekend when I realized  I spent a whole of 130 euros for supermarket purchases. It was supposed to be shopping to cover weekly needs. I did online shopping from one supermarket on Friday and went to another one on Saturday because the first did not had all items I needed and furthermore I had forgotten a few essentials like breakfast bread, garlic and pine nuts for my pesto, garbage bags…

Of course, when in supermarket physically one tends to buy a bit more than on one’s shopping list. My extravaganzas were two packages of filter coffee (€17,60 both), 4 bags of pine nuts, 1 can of tuna fish, spring onions and a salad. Oh, and bag of pre-cooked sweet corn combs that were significantly smaller that the ones I bought a few months ago. Total expenditure: 42 euros.

I spent 130 euros in total to cover the weekly needs. The whole purchase included 1,200 gr of chicken but no other protein for a meal, not even eggs which I buy from a small shop in the neighborhood ; it also contained no rice, pasta or potatoes, no frozen food or meals, no olive oil, not even detergents or other stuff for house or clothes cleaning, no paper stuff we use in the kitchen or the bathroom. .

So where in the hell did these 130 euros go?

But 130 euros actually for half of the goods to cover basic needs?

It was first during the economic crisis, when we got to know shrinkflation: the phenomenon where an item normally brand products is smaller in weight or size and package but is sold at the same or even higher price. 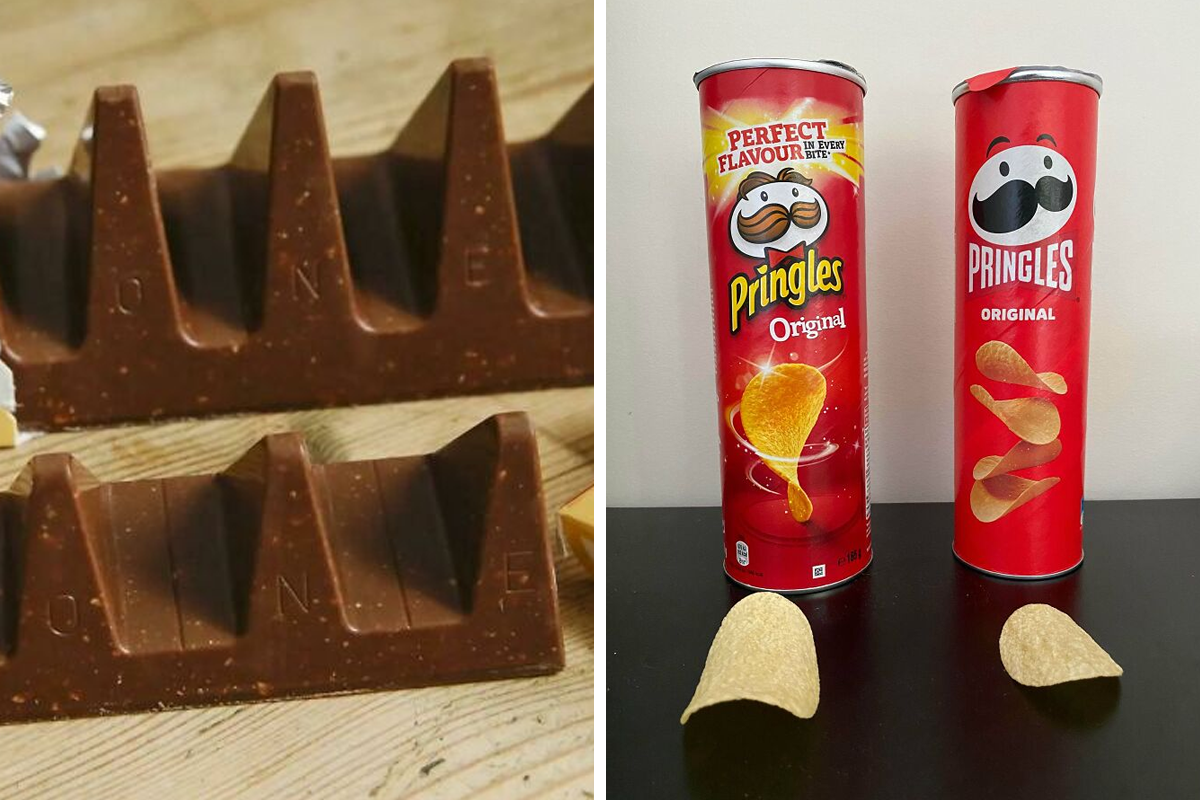 The most famous example: it’s not the climate change that melted the Alpine chocolate peaks but the shrinkflation

I can still remember well how stunned I was to have bought a replacement bag of Nesquick only to find out that a whole of 100 gr were “missing.” The price was the same as when the bag was 500gr. “What kind of thieves are they?” I remember to have asked very loud and accompanied by my favorite f-word. The same had happened with other items like washing powder etc.

And the same phenomenon has appeared again in the last two months in the year 2022.

I  – and certainly also other consumers in Greece – have realized that yogurt cups have grown smaller and the same have bags of frozen veggies,  packed cheese, and other packed products, you name them….

100 gr here, and 100 ml there, we are maybe deprived of 1000 gr in total when we make our weekly purchases at the supermarket.

At the same time, the prices may look as if they remain the same as before but they have increased in fact.

Prices in supermarkets have climbed up although not all companies have joined the Price-Hikes Club. an indicative list of price increases in the last month by media tvxs.gr

Next to the significant price increases consumers already see on the supermarket shelves, prices are expected to increase even further towards the end of September.

In the coming weeks, industries and commercial enterprises are expected to send new revised price lists to supermarkets. This implies new increases gradually on the shelves, depending on the stocks of the products that the supermarkets have in their warehouses.

But now consumers seem to strike back: they leave brand products on the shelves and switch to private label (PL) products

An annual survey carried out by the Marketing Laboratory of the Athens University of Economics in a random sample of 1,500 households, showed that 31.8% of the products that consumers buy from supermarkets are private label. This percentage is the highest that has been recorded in recent years in the context of the survey.

On the subject of price, the vast majority of the sample 86.4% (up from 72.9% last year) consider private label products to be better value.

Georgios Baltas, professor of the Department of Marketing & Communication of the Athens University of Economics and Business, explained to state-run news agency amna, that private label is expected to be significantly strengthened both in Greece and internationally by the economic pressure exerted to consumers, due to the energy and inflationary crisis.

“Consumers are looking for cheaper purchasing options and their behavior strengthens the market share of private label products, to the extent that they continue to be offered at significantly lower prices and are not threatened by strong promotional actions of the competition” Baltas noted.

He pointed out that international scientific research has shown that “the overall strength of private label products is quite influenced by macro-economic factors. Private label’s overall market share tends to increase when economic conditions worsen, as consumers shift to lower-priced products due to declining disposable income.”

The high speed of development of private label products in the Greek market is demonstrated by the data of the research company IRI which show that sales in value increased by 10.2% from January to July 2022 year forming a market share of 15.9% from 14 .8% in 2021. Accordingly, sales in value of branded products in the same period increased by 1.2%.

Vangelis Foskolos, Senior Consultant IRI Hellas, said that “consumers are increasingly turning to cheaper brands and private label products, in order to maintain, as far as they can, consumption levels and the size of the purchase basket”.

It is noteworthy that the price increases in the 7 months of 2022 vary by a total of 4% (4.3% for brands and 6.5% for PLs) while a drop in the percentage of sales value realized under promotion regime is recorded.