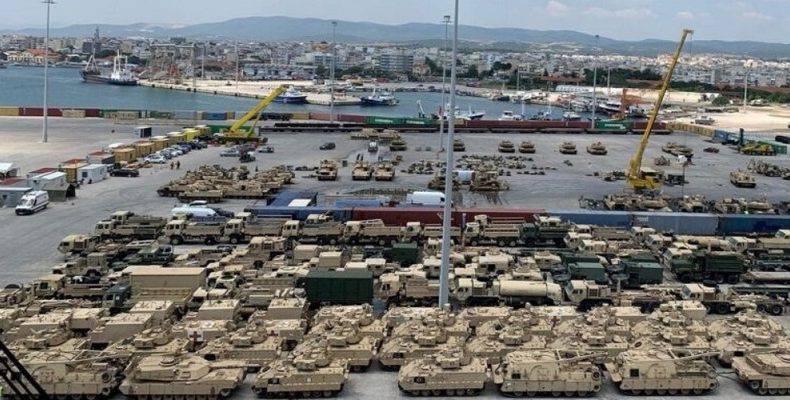 The port of Alexandroupolis in north-eastern Greece has grown in strategic importance as Washington strengthens military ties with the country. This has been to the detriment of America’s longtime ally, Turkey, as the authoritarian President Erdogan is increasingly distrusted by Western leaders. At the same time, the privatization of the port is due with American companies to have submitted their bids.

Alexandroupolis is a crucial entry point for the shipment of military material to Ukraine, as well as a strategic location for the diversification of European energy sources. It is located in the far northeast of the country, 18 miles west of the Turkish border and 30 miles south of Bulgarian.

Over the last three years, the United States and Greece have signed agreements to strengthen their defense cooperation and guarantee “unlimited access” to a series of Hellenic military bases. Among these is a Greek Armed Forces installation in Alexandroupolis. Since this collaboration began, the port has experienced unusually high traffic of military ships… so much so that, when 1,500 Marines from the USS Arlington docked in May, the city’s 57,000 inhabitants faced shortages of some products, such as eggs and tobacco.

“The port can receive ships of up to 650 feet in length. Its proximity to the newly improved road network and its connection to the railways makes it one of the most important ports in Greece,” explains Reserve Lieutenant General Ilias Leontaris. “The US has asked Greece to include Alexandroupolis in the list of areas where the Americans will have a presence, because this port allows them to move forces and materials to Eastern Europe with ease.”

The Americans have made certain improvements to the port aimed at facilitating the loading and unloading of materials. In 2021 alone, the US Armed Forces moved 3,100 “pieces” through it, according to official sources cited by The New York Times. These sources did not specify the type of military material, but assured the Times that it was all destined for US bases in Europe. This year, up until July, more than 2,400 pieces moved through the port. Bushmaster Protected Mobility Vehicles – sent by Australia to Ukraine – have also landed in the Alexandroupolis port, according to the Greek newspaper Kathimerini.

The US deployment in Alexandroupolis has not gone unnoticed by Moscow. As early as January, the Kremlin accused Washington of sending weapons to Kyiv through the Greek port.

“Alexandroupolis is a gateway to the Balkans and the corridor to Ukraine. As Turkey has become a less reliable ally, it is necessary to have an alternative route that can be activated,” says Harry Theoharis, a former Greek minister and MP for the right-wing New Democracy party. Hence, the port of Alexandroupolis has become a coveted geopolitical object, now that its management is being offered to the highest bidder.

In exchange for successive financial rescue packages that the EU has given Greece over the last decade, Brussels has forced Athens to privatize numerous public assets, including the management of its ports.

By the deadline on Thursday, September 22, Greece had received two binding bids for a majority stake in the Alexandroupolis port. One is by Quintana, an American company with interests in the energy sector; the other is by International Port Investments Alexandroupolis, a joint venture led by the Greek construction company GEK Terna, with participation from BlackSummit, a U.S. investment fund. Two other bidders with Russian ties – one owned by Savvidis, the other by the Coupelouzos family, who have a partnership with the Russian energy company Gazprom – were ultimately excluded.

“We are not going to hide that we have the support of the US government,” says John Charalambakis, managing director of BlackSummit Financial Group. EL PAÍS has two sources claiming that American and European political representatives travelled to Greece to exert pressure on the deal.

“Greece is becoming the energy gateway to the EU. And we intend to use the port of Alexandroupolis and that of Kavala [also recently privatized] to advance the interests of the West in the axes of military security, energy security, food security – Alexandroupolis can export Ukraine’s grain – and commercial security,” Charalambakis affirms.

The recent decision on the port of Alexandroupolis will influence the relationship that Athens has with Washington and Moscow – successive Greek governments have tried to maintain a policy of balance between both powers. This will now surely be tested. [full story EL PAIS]

Hellenic Republic Asset Development Fund (HRADF) announced on Thursday it had received two offers for the acquisition of 67% of the Alexandroupolis Port Authority (OLA).

Offers were were submitted by the following investment schemes (in alphabetical order):

The process of evaluating the financial offers will begin immediately, as per the terms of application. The offers of investors meeting the tender’s terms will be unsealed at HRADF’s next board meeting, following all foreseen procedures.