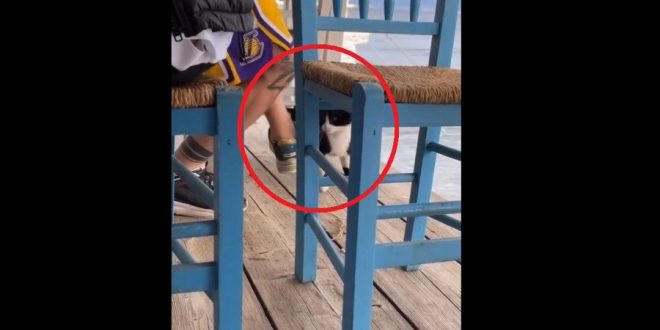 The prosecutor of Greece’s supreme Court intervened after a First Instance court in Halkida acquitted a 30-year-old man who kicked a cat into the sea in last May.

Prosecutor Isidoros Dogiakos intervened to examine the correctness of the court on the island of Evia.

The court’s reasoning for the acquittal was that the kitten did not suffer any physical harm from being kicked into the sea and than the defendant apologized publicly, daily efsyn reported on Wednesday.

According to the case file and the video one of the defendant’s friends filmed and uploaded online, the young man had lured an unsuspecting cat with a fish to approach him and then kicked it, throwing it into the sea.

The abuse had caused a social outcry and serious reactions that reached even the highest political level, as well as the public prosecutor’s intervention that led to the prosecution and trial of the 30-year-old. KTG thoroughly reported here.

However, on October 19, the three-member Criminal Court of Chalkida acquitted the perpetrator of the abuse of the kitten. Subsequently, prosecutor Dogiakos requested the decision of the court of Chalkida in order to study whether there was a misinterpretation of the animal protection law.

It should be recalled that torturing an animal is a felony and carries a fine of up to 50,000 euros and a prison sentence of up to 10 years.

Also the man’s acquittal triggered an outrage, with journalist Stamatina Stamatakou who first published the story and the video last May to post on Twitter:

Innocent thugs and by Court decision. Shame. Kick without fear.
The guy who kicked the cat in #Edipsos was acquitted because he said he did it once, apologized and promised he wouldn’t do it again… No matter what we saw with our own eyes. Greek Justice is blind.

Some media like Mega TV pointed out that justice tends to be less blind when it comes to small communities.