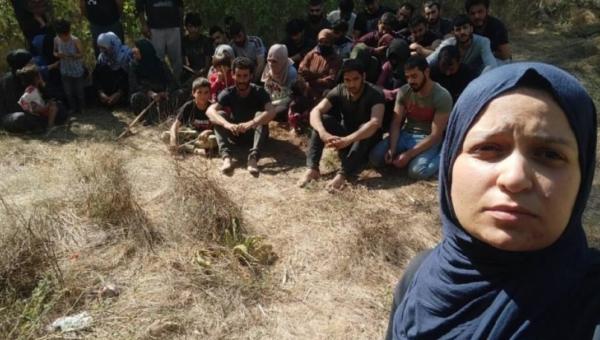 One of the 38 refugees stranded on an islet along the Greek-Turkish border last summer has come forward to claim that the alleged death of a 5-year-old Syrian girl on the islet was meticulously stage-managed.

The man, a Syrian national, has told Kathimerini that the young girl, who is alive, was laid down and make-up was applied to her face to make her look like she had died. Her hair was then cut to alter her appearance.

The suggestion to stage-manage the death was made by a Turkish refugee trafficker and carried out by a woman, Baidaa S., who suddenly appeared with the group and posted photos, videos and messages.

After the refugees were finally admitted on Greek soil and sent to a camp, Baidaa disappeared, he said. She subsequently turned up in Germany, where her husband has lived since 2015. Her social media posts indicate that she shuttled between Germany and Turkey, and her life, as presented in them, is far from that of a stateless refugee.

The story, which erupted in the media last August, depicted Greece’s alleged callousness toward refugees. German magazine Der Spiegel, which had covered the story over three reports and a podcast last summer, published a lengthy retraction in late December, saying there were mistakes made in its reporting but stopping short of admitting the death did not happen.

Kathimerini understands the interviewed man has given a lengthy deposition to Greek police. Speaking on condition of anonymity, he said he came forward because he feared repercussions and insisted his revelations were not suggested by Greek authorities.

The Syrian refugee gives a detailed description of how the 38 came together at the border and how Turkish security forces egged them on. He recounts that, in a first attempt to enter Greece, masked mean beat up the refugees and pushed them back.

Asked why the family of the young girl had acquiesced in the setup, he said the trafficker told them they had paid less than others to cross the Evros River, which forms most of the Greek-Turkish border, implying they were indebted to him.

Baidaa was not the only one among the group who left the refugee camp shortly after arrival and turned up in Germany. But in her case, there are several indications that she already possessed the necessary travel documents, kathimerini reported.

According to government the death of the little girl was “anti-Greek conspiracy orchestrated by Ankara, with the aim of causing a “hot incident” at the border.

“If it turns out that the refugees were forced to fabricate the death of a child, as the testimony in “Kathimerini” claims, it is due to the impasse of the criminal policy of the government, which refused for days to rescue the refugees, violating the order of the European Court of Rights of Man, with the non-existent argument that the islet was Turkish, while it turned out that it was Greek and that the refugees were also in the Greek part of it,” notes daily efsyn.

Government spokesman Giannis Oikonomou personally attacked the leader  of SYRIZA. Alexis Tsipras, asking him if he “feels ashamed, that he internationally discredited his Homeland – even giving weapons to its enemies – to satisfy his personal grudge against the Prime Minister?”

The Minister of Immigration and Asylum Notis Mitarakis insisted to Open TV that “we are not talking about an attempt to deceive but an attempt to increase tension in Evros”, while indirectly announcing new prosecutions based on the rhetoric of national humiliation.

“Who were the people who orchestrated this incident? The trafficker mentioned in the reports is likely to be Greek […], in the specific case of manufacturing the allegedly dead child, Greeks are likely to be involved,” Mitarakis said.

It should be recalled that Mitarakis had confirmed the girl’s death on August 16, 2022.

“It is a matter of honor for him [Tsipras] to apologize to Greek police, to Greek soldiers and to our akrites in Thrace,” said Minister of Citizxen ProtectionTakis Theodorikakos, while he described the islet that also belongs to Greece as Turkish.

SYRIZA spokeswoman Popi Tsapanidou gave a harsh answer, highlighting the responsibilities of the government for its criminal actions. “Even if – without a second thought and further investigation – the government through the government spokesman rushes to adopt only the last testimony as true and exploit a tragic case for expediency, it overlooks that even this testimony vividly describes the exploitation of refugees by traffickers, Turkish border guards but also by hooded men who beat them to death on Greek soil to prevent them from entering the country.”

“If it turns out that the refugees were forced to fabricate the death of a child, as the testimony in “Kathimerini” claims, it is due to the impasse of the criminal policy of the government, which refused for days to rescue the refugees, violating the order of the European Court of Rights of Man, with the non-existent argument that the islet was Turkish, while it turned out that it was Greek and that the refugees were also in the Greek part of it,” noted daily efsyn.