Hundreds of Greeks Lined Up for a Food-Aid Package

Hundreds of needy citizens lined up as early in the morning of the last day of austerity year 2011 to get an aid package distributed by the Greek Red Cross. Large families, lonely elderly, jobless, homeless, immigrants and refugees queued outside the Red Cross Headquarters in downtown Athens for a package of aid that would enable them to have something to eat. A total of 1,200 packages containing oil, pasta, flour, sugar and milk were distibuted  to cover some basic needs of people in despair hit by the economic crisis and the strict austerity.

Speaking to news portal NewsIt, Eleni Katrapa,  social worker at the Red Cross,  said that the need for aid has tremendously increased and thus for people who used to have a job until recently and found themselves without income from one day to the next. Katrapa stressed that there are dozens of such examples and she mentioned the case of a family with 3 underage children and a bank loan. They both lost their jobs within the last five months with the effect to be unable to pay their rent or buy food. 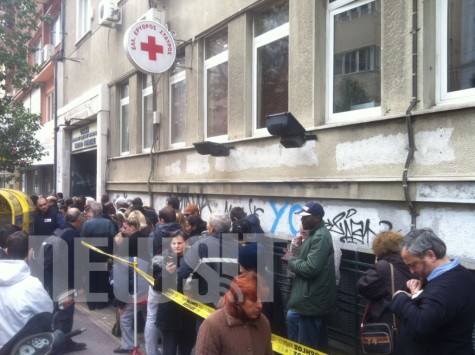 Non-governmental organisations, municipalities, supermarkets, and other social institutions called for solidarity donations in food items and helped thousands of needy Greeks over the Christmas and New Year holidays, in the salvation IMF-year 2011.

Who could have thought three years ago, that citizens of the European Union and the ‘prosperity promising’ Euro Zone would queue for some pasta and a liter of cooking oil…?