At six o clock’ in the morning tension had rosen as some workers attempted to enter the plant and return to work. They were confronted by the strikers. The argument was ‘solved’ through the use of tear gas. 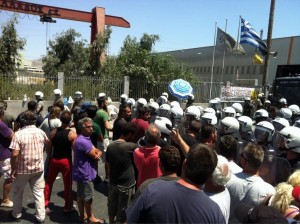 PAME, the union of Communist party KKE has announced a protest in Athens on Monday evening.

After an order of Prime Minister Antonis Samaras police reopened of the steel plant on Aspropyrgos on Friday. However the steel workers union decided to continue the strike. Halyvourgia steel workers went on strike nine months ago when the plant management decided massive lay-offs, reduction of working hours and salaries. On Friday, the management said it would cancel the lay-offs but workers still refuse to work on rotation basis and work for peanuts.