What? You thought that dumping labor wages down to 500 euro per month would boost competitiveness? You thought that working 13 hours per day, 6 days per week will turn the debt-ridden country into growth paradise? The myth of “wages dumping as the fundament for competitiveness” is collapsing and thus by a report of the World Economic Forum (WEF).  Switzerland tops in global competitiveness index, India is 59th, Greece is 96th.

Furthermore the WEF report proves Greece’s leading lenders IMF and EU are wrong with their competitiveness policies. Then it takes much more for a country to be competitiveness than just have its labor forces sell their work for a bowl of rice.  Do not tell me, that Swiss, Finnish, Swedish, Dutch or German laborers wake up in the morning and go to a factory for less than 2 euro per hour. I won’t believe you!

Switzerland has the world’s most competitive and innovative economy, but some of its European neighbors are faltering and the US has slipped further down the ranking, the World Economic Forum (WEF) said Wednesday.Singapore maintained its second place, while Finland came in third, bumping Sweden to fourth place, followed by the Netherlands and Germany, according to the organization which hosts the annual Davos pow-wow of business and political leaders.“Switzerland earns the top spot in innovation, owing to the excellence of its education system, the high company spending on R&D (research and development), and the strong collaboration between the academic world and the business sector,” the WEF enthused in its Global Competitiveness Report 2012-2013.

Switzerland, which topped the ranking for the fourth year running, was also lauded in several other areas, including as the world-leader in labor market efficiency, and for having one of the most stable macroeconomic environments in the world.

But the picture was not quite so bright for a number of other European countries and the United States.

While European countries, especially in the north, continue to dominate the list of the world’s 10 most competitive nations, those in the southern part of the continent dipped further down the list.

Crisis-hit Greece, for instance, slipped to 96th place out of the 144 countries ranked, from 90th last year, while Portugal dropped to 49th from 45th place and Spain held its ground at 36th.

While WEF economist Thierry Geiger told AFP this small but negative trend was worrying because it reflected a significant drop in French government efficiency in the past couple of years, as well as in the macroeconomic environment and especially labor market efficiency.

WEF senior economist Margareta Drzeniek Hanouz stressed that the United States “still has one of the most sophisticated business environments in the world.”

However, she told AFP, the country is facing large “macroeconomic vulnerabilities”, including the rising deficit, and at the same time severe political deadlock and a dwindling trust in politicians.

“This results in an inability to address some of the major problems they’re facing,” she said, stressing that the politician fatigue was directed at both the country’s main political parties.

The WEF report was based on publicly available data and a survey of 15,000 business leaders in 144 countries.(sources) 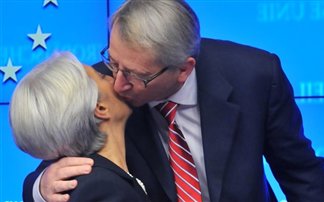