Athens: Clashes Between Anti-Authoritarians and Extrem-Right Sent 2 to Hospital

September 30, 2012 Society Comments Off on Athens: Clashes Between Anti-Authoritarians and Extrem-Right Sent 2 to Hospital 72 Views

Anti-authoritarians, foreigners and “residents” turned the Athens district of Agios Panteleimon into a ‘battlefield’ on Sunday evening and the clashes sent two citizens and one policeman to the hospital and at least 15 to the police station.

Somr Greek media report, that a group of some 80 people on scooters moved to the area from Exarchia and started shouting “Ban the fascists from the area!”.  They began to intermingle with the angry residents who had come out of their homes holding bats and started to clash with foreigners of the area who were also “armed”.

Some other media report, the motor-bikers were attacked by extreme-rights and the two groups fought body-to-body, while others report of an anti-racists motorbikers who clashed wiht extreme-rights.

According to a third informations source, “the motorbikers were antiracists who clashed with fascists who were smashing shoprs owned by migrants. The motorbikers beat the fascists and sent them to hospital.”

There are also reports that the clashed extended to the area of Amerikis Square in downtown Athens.

Both Agios Panteleimon and Amerikis Sq are areas with a high percentage of documented and undocumented immigrants. Locals had often called the bullies of extreme-right Chrysi Avgi to ‘safeguard’ them.

Video: police, people, one injured on the head

Later in the evening the tension was transfered to Exachia where anti-authoritarians clashed with police. 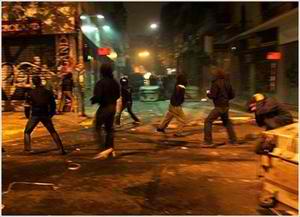 The incidents in Agios Panteleimon come a day after Chrysi Avgi *Golden Dawn) and anti-authoritarians clashed in the city of Volos in central Greece. The prosecutor investigates complaints that a GD-MP who was present at the incident showed his gun to one anti-authoritarian.