Eleni, Zaroulia, Member of the Greek Parliament and wife of party chairman of Chrysi Avgi (Golden Dawn) will sit on the Council of Europe’s Committee on Equality and Non-Discrimination. Zaroulia will be in Strasbourg as an alternate member of the Greek parliamentary  delegation.  “What does a member of a party involved in racist attacks and discrimination do in a non-discrimination committee, a committee known to fight racism and xenophobic behaviour?” ask many and not only Greeks.

“Eleni Zaroulia is in in Strasbourg to participate as an alternate member of the Greek parliamentary delegation in the works of the Plenary Assembly of the Council of Europe’s pan-European organization which is known to fight racism, bigotry and discrimination.

The presence and participation of an MP of the neo-fascist construct of the Golden Dawn in the works of the Parliamentary Assembly of the Council of Europe has already raised queries and question marks in diplomatic circles in Strasbourg and is expected to trigger letters of protest against such a presence in an institution and a pan-European organization which at every opportunity, condemns violent racist behaviours and the promotion of xenophobic movements and ideas.

Head of the new composition in Greek parliamentary delegation to the Assembly of the Council of Europe has been appointed MP of Nea Democratia, Dora Bakoyannis, who recently had her parliamentary immunity lifted and is subject of legal inquiry and accountable for hiding assets and making inaccurate family tax declaration.” (tvxsgr)

Eleni Zaroulia  is listed in the official website of the Council of Europe Assembly. Here is the full list of the members of the Greek delegation coming from all political parties represented in the Greek Parliament. 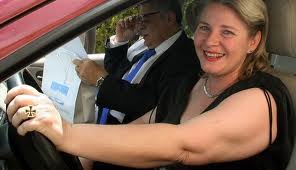 Members of the CoE committees are elected by, or appointed from among, the members of the national or federal parliaments of each member State. Therefore….

PS Greeks still got humour, despite the crisis 🙂