Nikos Pappas, the Navy commander of the Velos mutiny against the junta, passed away at the age of 83.  He became famous when he withdrew destroyer Velos from a NATO exercise in May 1973 and led the ship to a port in Italy. There he and 31 other officers sought political asylum. Nikos Pappas gave a press conference in front of international media and denounced the military dictators’ regime. 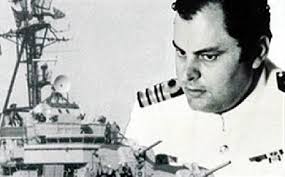 In retaliation, the regime dismissed him from the Hellenic Navy and stripped him of the Greek citizenship. VELOS  (English “ARROW”), now a naval museum is anchored in the Park for Maritime Tradition in the Gulf of Faliron in Athens, next to destroyer “Averof”. Faliron Marina.

In an anti-junta protest, on 23 May 1973, HNS Velos, under the command of Commander Nikolaos Pappas, refused to return to Greece after participating in a NATO exercise and remained anchored at Fiumicino, Italy. During a patrol with other NATO vessels between continental Italy and Sardinia, the captain and the officers heard over the radio that a number of fellow naval officers had been arrested in Greece. Cdr Pappas was involved in a group of democratic officers, who remained loyal to their oath to obey the Constitution, which was planning to act against the junta. Evangelos Averoff also participated in the Velos mutiny, for which he was later arrested as an “instigator”.

Pappas believed that since his fellow anti-junta officers had been arrested, there was no more hope for a movement inside Greece. He therefore decided to act alone in order to motivate global public opinion. He mustered all the crew to the stern and announced his decision, which was received with enthusiasm by the crew.

Pappas signalled his intentions to the squadron commander and NATO headquarters, quoting the preamble of the North Atlantic Treaty, which declares that “all governments … are determined to safeguard the freedom, common heritage and civilisation of their peoples, founded on the principles of democracy, individual liberty and the rule of law”, and, leaving formation, sailed for Rome.

There, anchored about 3.5 nautical miles (6 km) away from the coast of Fiumicino, three ensigns sailed ashore with a whaleboat, went to Fiumicino Airport and telephoned the international press agencies, notifying them of the situation in Greece, the presence of the destroyer, and that the captain would hold a press conference the next day.

This action increased international interest in the situation in Greece. The captain, six officers, and twenty five petty officers requested and remained abroad as political refugees. Indeed, the whole crew wished to follow their captain but were advised by its officers to remain onboard and return to Greece to inform families and friends about what happened. Velos returned to Greece after a month with a replacement crew. After the fall of junta all officers and petty officers returned to the Navy. (wikipedia)

After the restoration of democracy in 1974, he returned to Greece. He served as Chief of the Hellenic Navy General Staff in 1982–1986 and Minister for Mercantile Marine in 1989–1990.

Nikos Pappas died in his home in Athens on Friday after a long battle against cancer.

Click here to read what international media (UPI report, published 28 May 1973) reported back in 1973 about the Velos mutiny.