The crucial meeting among Greek prime minister Antonis Samaras and his coalition partners Evangelos Venizelos (PASOK) and Fotis Kouvelis (Democratic Left) meet at 7:30 pm. Coalition government cohesion is at risk after Samaras ordered the shut down of public broadcaster ERT on June 11th 2013.

While the government leaders meet, main opposition party SYRIZA is to hold an open political meeting at Syntagma Square.

At the same time judged of Greek Supreme Administration Court meet to decide whether they will take up the file submitted by ERT union.

KTG offers its readers a live blogging with the latest news  directly from Athens. all you need to do is to refresh the page from time to time.

Samaras is adamant in keeping the ERT shut down.

Venizelos & Kouvelis want ERT to reopen and then discuss with Samaras a restructure plan.

The decision might become known at 9 pm tonight or tomorrow morning.

After the closure last Tuesday the management and the assets of ERt went over to Finance Ministry.

ERT S.A. as legal entity has been dissolved.

Greek media report that Venizelos went to the meeting with a proposal where from 2,000 civil servants should be dismissed.

Samaras justified his decision saying that “ERT was a symbol for corruption and waste of money.”

But the real point is: the government partners had to follow the Troika’s demands and dismiss 2,000 civil servants already in May. This did not happen.

Under the Troika pressure on so-called ‘reforms’ Samaras decided to delete ERT from the TV screens of the Greek and diaspora households.

European Commissioner for Economic Affairs Olli Rehn warned that the last thing needed in Greece is a new crisis. Regarding the issue of ERT,  Rehn expressed the hope the gov’t partners would find a solution soon/ He streesed th eneed that Greece respects the principles of European Commission laws and recalled the Treaty of Amsterdam according to which EU member states have to have national broadcasts and even finance them.

Alexis Tsipras started his speech at the open meeting at Syntagma Sq in front of the Greek Parliament.

“Tonight we get rid of this disaster government.”

“We achieved democracy with sacrifices. We won’t let you take it back with Legislation Acts”

Samaras shut down ERT with a legislation Act bearing the signatures only of Nea Dimocratia ministers and not of the whole cabinet foreseen by the Constitution. Normally Legislation Acts are implemented in cases of emergency like war or disasters.

“After the ERT-muzzling, you are finished, Mr. Samaras.”

“Good night, Mr Samaras. Please, do not forget to leave the house silver as you close the door behind you.”

“They said if SYRIZA came to power, the country would collapse.They promised social peace. They meant repression.”

The board of private union umbrella GSEE will meet after the leaders meeting to decide about protest mobilizations.

Samaras reportedly submitted a 9-points plan to his coalition partners.

Kouvelis insists that any discussion should be done with ERT open.

This is the first severe crisis of the Greek coalition government – and that on the day of its first anniversary.

The PM insists on closure of ERT and proposes a transitional period until the launching of the new public broadcaster NERIT.

Government reshuffled – as demanded by Venizelos/Kouvelis  after Nea Dimocratia convention on June 28/2013.

Update of the governance agreement among the partners. “Rewarming of their relations” [or something like that lol – sorry]

Concerning the ERT Samaras’ proposal is the same as submitted to Venizelos/Kouvelis two days ago via Minister Stamatis. They both had rejected it.

I also heard he had a proposal on how to hire personnel or how to keep ERT personnel on NERIT, but I have to check this point again.

It looks as if we, Greeks, will have two media ministers: one for ERT/NERIT/public broadcaster and one for the other media. We are large and have money to spend. 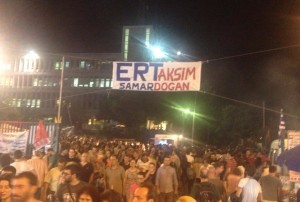 Greece’s Supreme Administration court ruled that ERT must reopen and until the procedures for the new public broadcaster conclude.

In fact the Court ruled that the Legislation act was not conform with the Constitution.

The court advices all institutions involved to take the necessary measures and procedures to reopen the ERT.

The decision is temporary as probably the court will finally decide in upcoming September – maybe.

The court ruling practically reverses and annuls Samaras’ Legislative Act to shutdown ERT. It sets the clocks one minute before 11:15 pm on Tuesday, June 11th 2013 when minister Kedikoglou pulled the plug.

The President of the Council of State (StE) K. Menoudakos accepted the request for a preliminary reverse of Samaras decision as it was submitted by ERT-union POSPERT.

The President of the Council of State accepted the request of POSPERT and gave the “green light” for the temporary reopening of  public broadcaster ERT.

During a hearing that lasted two hours, the lawyers of Finance ministry argued that the President of the Council of State could not issue a temporary injunction on the issue of ERT.

At the same time, they pointed out that it was for reasons of mismanagement that prompted the Prime Minister to decide on the immediate closure. In addition, the FinMin representatives argued that the government was not required to maintain a public broadcaster since no constitutional provision or international convention providing such a thing.

On the side of the POSPERT it was argued the the ERt padlock would cause economic damage. argued, inter alia, that the padlock ERT economic damage will occur. They submitted documents that the closure of ERT touches issues of national security and national defense. [it has to do with the frequencies] 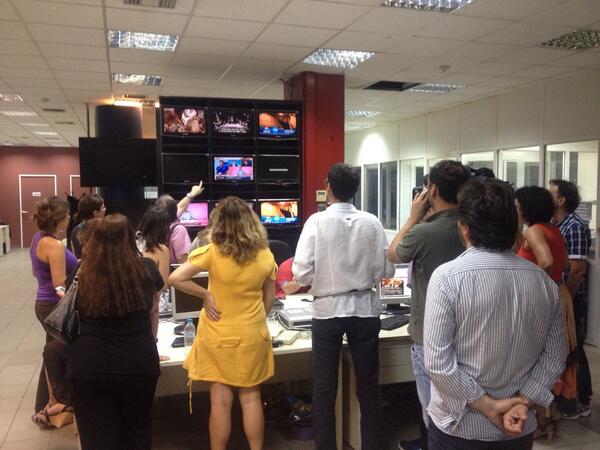 The court ruling made journalists and bloggers across the country to totally forget about Samaras-Venizelos-Kouvelis discussing inside the Prime Minister’s office.

Samaras must be unbelievable relieved having the court picking him out of the political deadlock.

However the glass is broken.

His slogan “we have to break eggs” backfired. He broke all the eggs but the omelet slipped away from the frying pan.

His coalition partners will remember his stubbornness and one-man-governing.

Public broadcaster ERT employees will remember, how he defamed them as “corrupt and lazy”.

Samaras will have to live with them until the new public broadcaster opens. And until the next elections take place. Maybe in September.

ERT signal has to return on TV screens as of tomorrow morning.

It is not very clear how the things will proceed. Will all the employees start working as of tomorrow – including the corrupt management and the political appointees (special advisers) hired after Samaras’ government came to power but also hired by previous governments?

ERT journalists on air via internet try to find out how is the court ruling interpretation in real life.

Samaras’ statement is expected in order to clarify the issue.

trying to interpret the court ruling and watching the ERT online, KTG understands that the decision refers to

the broadcast of 3 ERT television channels, all the ERT radios and the internet website.

Unfortunately, it looks that the music ensembles will not be positively affected by it.

Court ruling: “The government can appoint an ERT general  manager. IT will be up to him to procceed to lay-0ffs or new hiring.”

Samaras, Venizelos, Kouvelis meeting concluded . The leaders are expected to make statements but a little later.

the discussion we had will continue on Wednesday. We discussed about all issues. Main point was the coalition government agreement that foresees the equal representation [wrong word here] of the coalition gov’t partners.

it is important that this government operates as 3-party gov’t and not one-party gov’t.

On ERT: it has do do with democracy.

We favor radical reforms but based on thorough study and based on democratic procedures like after parliament voting.

No government can violate the constitution and blacken the tv screens, depriving citizens here and abroad form information. – makes also reference to cut off BBC and other foreign channels.

Samaras seemed to have understood the need for update of coalition gov’t agreement, gov’t reshuffle.

First of all we need to solve issues of democracy and order.

ERT will reopen with a cabinet decision with approval of all ministers [and parliament vote?]

Then there can be evaluation of employees and restructure.

the message of the society was clear, it didn’t want early elections but democratic reforms.

He made also reference to the international outcry.

Court ruling ordered the immediate restore of the frequencies of public broadcast ERT.

Every citizen has the right to culture, education and information.

Nobody can act as one-party if in coalition government.

The Legislation Act did not have the signatures of four ministers [froom PASOK & DemLeft].

from what KTG understands:

The court does not ask the reversal of

Result: Puzzled KTG (and with me thousands of Greeks, ERT personnel incl)  understands that ERT must reopen immediately. But question is who will operate the program in terms of journalists and technicians?

Will the new manager hire new personnel and keep the fired 2,656 out of work? The issue is too complicated for this late hour.

‘The court ordered the government to broadcast. It confirms the abolition of ERT. We will meet again on Wednesday.”

You have been a wonderful audience.