Here! There are indeed billionaires with Greek blood flowing in their veins. But they are not here in Greece. They are in the U.S.A. Six Greek-Americans are among America’s richest people, according to the 2013 Forbes 400 list released on September 16. All of them are self-made and their net worth varies from $1.3 billion to $4 billion. Here are the successful Greek-Americans who landed one of 400 spots on a list of America’s richest people as released by Forbes magazine:

John Paul DeJoria, the second son of an Italian immigrant father and a Greek immigrant mother ranks 110th with a net worth of $4 billion. According to the Forbes list, he is the richest American of Greek descent. Dejoria comes from rough beginnings–his parents were poor, and as a kid he was a member of a street gang.

Jim Davis, the Chairman of  footwear manufacturer New Balance, is the second richest Greek-American. Davis, the son of Greek immigrants, bought the company with only six employees and turned it into a global conglomerate with more than 4,000 employees. He is the 161st richest American, with a net worth of $3.1 billion.

John Catsimatidis, the self-made billionaire who ran unsuccessfully for New york City mayor, has a net worth of $3.1 billion and shares the 161st position with Jim Davis. Catsimatidis is the owner of Gristedes supermarkets in New York and he has also companies in the real estate and oil sectors.

The fourth richest Greek in America is George Argyros, with a net worth of $2.1 billion. He is the 26oth richest person in the US as of September 2013. Argyros, who was the Ambassador of the US to Spain under the second George W. Bush administration, owns real estate and investment companies.

Michael Jaharis is the 273rd richest person on the Forbes 400 list, with a net worth of $2 billion. Jaharis, who holds a PhD of Jurisprudence, DePaul University, owns pharmaceutical companies.

At the 386th position on the Forbes 400 list with a net worth of $1.3 billion is Dean Mitropoulos, founder of  the investment firm Metropoulos & Co. 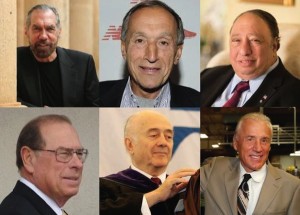 PS hm… I’ll take this one. Or rather… I’ll take that one. Or better… I should take the guy with … No, really! I honestly do not know…