Ballots boxes closed at 7 p.m. on Sunday for the second round of municipality and regional elections and the voting for the European Parliament. Right after the closing of ballot boxes, at 7 p.m., pollsters are going to publish the exit polls.

According to Interior Minister Yiannis Michelakis, first official results are expected between 9:30 and 10 p.m. in the evening.

The second round of municipality and regional elections take part in some 200  cities and towns across the country.

Crucial for the coalition government and opposition parties is the municipality winner in major cities like Athens, Thessaloniki, Patras and Volos.

In the ballots for the European Parliament,  Greeks will be voting to elect 21 MEPs from 1299 candidates. However, opposition parties have asked voters to turn the election into a referendum on the government. In the last few days, most opinion polls have suggested that SYRIZA would come out on top with a winning margin of up to 4 percentage points.

Should the Greeks give SYRIZA a lead of 4% difference from PM Samaras’ party and coalition partner PASOK receives lower than 6%, snap election are inevitable.

This happened too during voting…

The voting on Sunday took place in a generally calm atmosphere –  except in one polling station of Kato Achaia, Peloponnese, where two voters and supporters of two mayor candidates first attacked each other verbally and then physically. Some eyewitnesses intervened with the result that only the local police could solve the ballot conflict.

In Athens, a pensioner  was detained when he happened to pass the pollitng stations where PASOK leader Venizelos went to cast his vote. A group of PASOK supporters was applauding and praising Venizelos, when the pensioner shouted at them “Why are you applauding? Aren’t you ashamed? Did you forget the Lagarde list?”.

Under a bright hot sun, slight south wind, high humidity and Sahara dust on the SW horizon, voters in my neighborhood seemed to have chosen the hour after lunch to go cat their vote.

Greek media speak of a higher participation in the elections than last Sunday. And this independently from the fact that voting is compulsory.

In a polling station of Xanthi, Thrace, a voter wanted to vote only for the European Parliament elections and refused to take the ballots for the municipality and regional ones, saying, he didn’t want to cast a vote for these two elections.

For a short time there was some confusion, the police was called in and took the voter to the police stations where he was later released.

Of course, KTG will inform its readers with the latest updates – business as usual in the last four years… 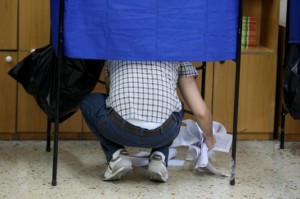 … and pick up the pieces on your way out 🙂