Thousands of hectares across the “Athens Riviera”, the Attica coast line from Cape Sounion in the East to Marina Zeas in the West have been transferred to the Hellenic Republic Asset Development Fund – Greek Privatization Agency (TAIPED) on Tuesday.The transfer of the Attica coastline to TAIPED was signed by eight ministers, including the finance, development, halth and tourism ministers.

This is the first step towards the sale off of Attica’s best and most expensive parts to private investors. The Greek state as owner of the land porperties demands nothing in exchange when it transfers to TAIPED.

Among the parts to be offered for sale are:

176 acres of land between the sports complex of Agios Kosmas – opposite the old Athens airport- and “Asteria” in Glyfada.

20 acres of land in Glyfada

383 acres of land in Aspro Lithari area of Sounion

the touristic part of Zeas port

the ski resort in Parnassus mountain.

What is read as plain “20 acres” or “176 acres of land” are in reality large plots of land across the coastline, with kilometer-long beaches offering leisure and free of charge outdoor sports opportunities to the four million inhabitants of the Greek capital Athens and Piraeus. Not to mention the sport facilities built for Olympic Games 2004, facilities that have been left to rotten as if they did not cost money. 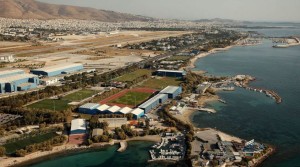 Left: old Athens airport, right: Agios Kosmas area. The whole coastline till the back will be sold to private investors. The end of Athens beaches grrrrrrrrrrrrr!

Full list of transfers to TAIPED in Attica, Chalkidiki and islands here (in Greek)

PS while in a typical Garage Sale the sellers sell goods of not necessarily A Quality, Greece is forced by the Troika to sell its best possessions to pay back the debts piled up by the country’s oligarchs and the incapable politicians. Shoo!