Greece’s resistance to Troika’s demand did not last long. Just a couple of days after the negotiations failure in Paris, the country’s lenders e-mailed the Greeks that they should definitely need to impose additional austerity measures and fill the hole of estimated 2.5 billion euro in the budget of 2015.  Αmong the measures the Troika demands from Greece are decreases 15%-20% in main pensions. lowering of public servants’ wages, increase of Value Added Tax for medicines, VAT hikes in the islands,  “lock-out” in labor conditions, increase in retirement age, and sharper economic criteria for receivers of poverty allowance (EKAS).

Demands that the Greek government can hardly fulfill when the majority of the society sinks in debts and unpaid bills.

After a throughout consideration and adding-subtracting “austerity measures vs political cost”, Greeks e-mail on Monday morning their proposals to the Troika.

“According to sources, the document sent by the Greek Finance Ministry includes the raising of value-added tax for hotels from 6.5 percent to 13. It is estimated this would raise some 350 million euros in revenues. The VAT rate at hotels had been cut in 2012.

Also, the government proposes that the unified pay structure in the civil service will apply to newcomers from January 1 and to existing employees from the start of 2016.

Greece is also proposing that it gradually phase out the exceptions to retirement rules, meaning that nobody would be able to retire before reaching the age of 62 from the start of 2019. (ekahtimerini)

The Troika’s response is expected during the week and if an agreement will be achived the IMF, EU and ECB representatives will come back to Athens for the progress review of Greece’s bailout program and the release of the bailout tranche.

Greek media report that the government has calculated that the increase of Value Added Tax in tourism will have the less political cost and the highest revenues as the country is doing splendid in tourists’ arrivals.

UPDATE: Greek hoteliers sharply criticize the government for the V.A.T. raise warning of an “economic suicide” and stressing that the packages for next year have been already sold and that it is too late for price changes now.

PS and with the government assumption that “tourism is doing great no matter what the price offers , we can forget the much praised and much-demanded competitiveness in tourism sector. Unless the personnel’s salaries do a deeper dive in the crystal clear blue waters of the Troika and debt lake… 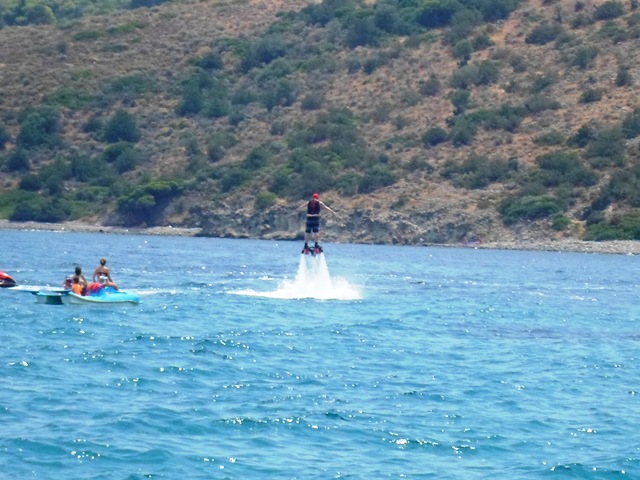 Greek tourism to take off. ops!