The time of truth has come and the clock is ticking… The third round of voting for Greece’s next President will decide whether the coalition government of Nea Dimokratia and PASOK will stay in power or the country will head to snap elections. Sole Presidential candidate Stavros Dimas needs 180 votes but he has very slim chances to get them together.

Nea Dimokratia and PASOK have together 155 votes, the rest came from independent MPs.

In today’s voting, the government targets again the pool of independent MPs – 24 in total – and some votes from Democratic Left and Independent Greeks.

After the second voting, the scenario was claiming that the coalition government hoped to receive the additional 12 votes from

1) the two Democratic Left MPs who abandoned the party short before the 2. voting  = 170 votes

4) only some votes from Democratic Left and Independent Greeks would help Dimas to climb the Presidential chair and avoid snap elections.

But as of today, half an hour before the third round of voting begins, no MP has officially declared that he would vote for Stavros Dimas.

Independent Greeks – 12 seats in Parliament – categorically said that they will all vote against Dimas.

Last week a scenario stirred the political world after 2 former Golden Dawn MPs – now independent – voted in favor of the Presidential candidate. According to rumors, more Golden Dawn MPs would vote for him in the third round, but Stavros Dimas said that he would resign, if he would be elected with the votes of the extreme right-wing. Eight GD MPs are in custody pending trial on charges for forming a criminal organization. They get permission and participate in the voting.

Of course, Greece is always good for surprises and we should not prejudge the results.

The parliament Speaker calls each one of the 300 MPs by name, they stand up and say loud their preference: either “Stavros Dimas” or “Present” which is considered as “No”.

Athens Stock Exchange apparently reacts very negative to the option of early elections, Monday’s session started with a big plunge as of 11:47 losses were at -7.99% and the General Index at 785 units.

Voting session has not started yet.

Parliament Speaker Evangelos Meimarakis opened the session saying “our thoughts are with the rescue operation to evacuate passengers and crew from Norman Atlantic.” Then he started reading the voting statute. 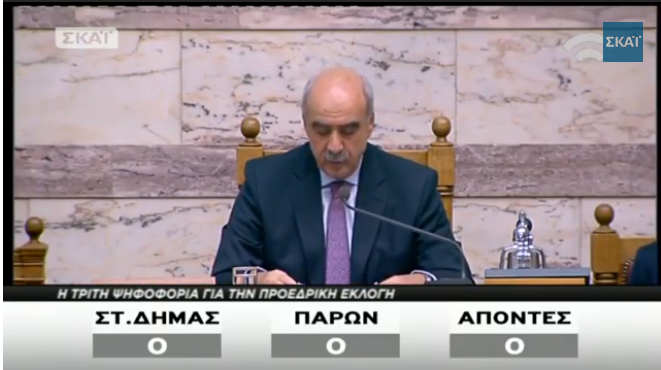 Dimas did not manage to gain more votes from independent MPs from Athens. 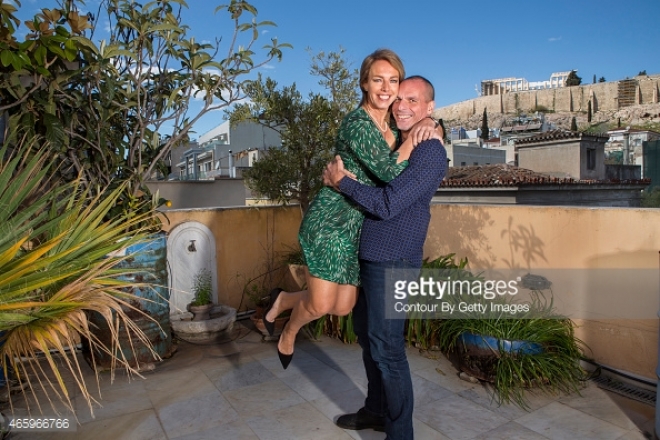 Hm…. we see no president around….

I suppose, traders know already that government will fail to elect the President and snap elections are just outside our door.

Samaras’ government did not gain one single vote more than in the second round! 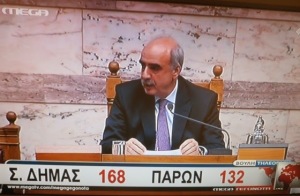 The Greek Parliament failed to elect the country’s next president. Parliament will be dissolved and snap elections will be proclaimed.

The cabinet is scheduled to meet at 2:oo pm

Prime Minister Antonis Samaras is due to make some statement.

What about Greece’s president? After the elections, the new Parliament will be called to elect the country’s next President.

The second stage of the procedure is conducted by the new Parliament as soon as it has constituted itself as a body and includes another three successive ballots:

In the first ballot the votes of a three-fifths majority of the total number of Members of Parliament is required.

Should this majority not be attained, voting is repeated within five days and the person receiving an absolute majority of the votes of the total number of Members of Parliament shall be elected President of the Republic.

If the second ballot fails to produce the required majority, then within five days the third and final vote takes place between the two candidates receiving the highest number of votes. The person who receives a relative majority shall be elected President of the Republic. (via wikipedia)

Athens stock Exchange seems to have recovered from the voting procedures, losses are at -8.17% from -11.11% during the voting.

“Today we had the last vote. We did everything we could to elect a president the current parliament and avoid early elections.

Unfortunately a minority of 132 members, into which congregates SYRIZA and Golden Dawn, is dragging the country into early elections.

What the Parliament did not do, it is time for the people to do it.  To get rid of the uncertainty.

The people will not allow that we return to the crisis. Tomorrow I will go to the President of the Republic, I will ask the dissolution of the Parliament and call for elections on January 25th.

In the fours weeks before the elections the people will learn the whole truth about where the country finds itself today.“ 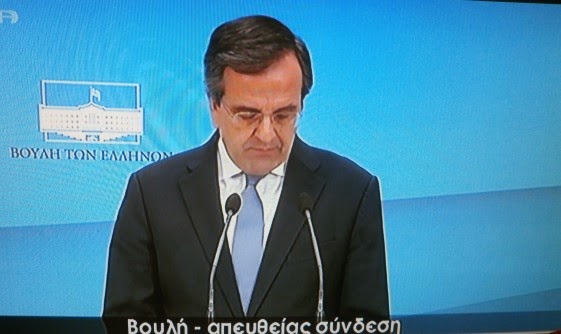 Some GD MPs moved threateningly against Defense Minister Nikos Dendias, they were stopped by one of the Parliament security officers.

They were shouting slogans against OPM Samaras and the government, “You are ridiculous,”, “Samaras in prison”,  “We’re awaiting for you in prison”, “You’re dead!”

MP Zaroulia spat at ex GD MP Boukouras for having voted in favor of Dimas. Golden Dawn leader Michaloliakos and his wife Zaroulia show thumbs down to PM Samaras. Together with 7 other GD MPs Michaloliakos is in custody pending trial on charges for having “formed a criminal organization”

“Today is a historical day for the Republic. Greek MPs showed that the Republic cannot be blackmailed.

The end of memoranda (loan agreements) is coming.

Today Samaras’ government that looted the society, belongs to the past.  The future began, be optimistic and happy.”

PASOK got very cold feet as former PM George Papandreou had earlier announced that he would establish his own party. Short after today’s voting, a group consisting of 6 PASOK ministers and party officials paid a visit to Papandreou’s office in the Parliament. They reportedly asked him to reconsider establishing a new political party. According to private Mega TV, Papandreou may announce his new party 2-4 January 2015.

It is not coincidence that elections will take place on 25. January and not a week later -1. February- a date that was also possible. The sooner the elections, the less the chances for Papandreou’s new party…

International media seem concern about the early elections especially as left-wing SYRIZA leads in public opinion polls.International media speak of “progress and economy recovery“, however the masses of people have hardly seen a penny of the much praised recovery in their pockets.

Τhe darkest scenarios predict that “the EU and the Greek elite will do everything in their hands to turn a SYRIZA governance into a disaster and teach a lesson to anyone trying to get rid of the bailout programs and agreements.”

But there is hope for austerity-ridden Europe… Pablo Iglesias, MEP and the founder of Spanish left-wing party Podemos twitted to SYRIZA:

Only with left-wing parties in the governance of the debt- and austerity-hit countries of the Eurozone South, chances are good to break some holes in the cruel and strictest German austerity and let impoverished folks to take a breath from the over-taxation.

Thank you for following KeepTalkingGreece.com 🙂