Greece’s acting Prime Minister Antonis Samaras could not help it. He could not go beyond his inner demons of vanity and political ambitions and self-righteousness. So he made a linking of the Charlie Hebdo massacre with the migration in Greece just for the sake of  attacking main opposition left-wing SYRIZA.

“You see what is happening in Europe. Today we had a massacre in Paris with 12 dead, while some people are inviting foreign immigrants here.

We raised the issue of illegal immigration in Europe. Over 90% of immigrants are not entitled to political asylum. Some have not realized it yet. SYRIZA is somewhere else and invites immigrants. Hollande, the Socialist, took the army to the streets and here some grant citizenships ,” Samaras said Wednesday evening during a pre-election campaign meeting of Nea Dimokratia in Chalkida.

Earlier and short after the attack in satirical magazine Charlie Hebdo in Paris, former ND Health Minister Adonis Gerogiadis had tweeted “The attack in Paris may prove for Europe the end of innocence with Islam. These of SYRIZA here say borders should be open [to migrants]” and triggered an outrage among left media and the internet community.

Desperate politicians seeking votes in the pool of far-rights in a very short elections race? Or far-rights and xenophobic in the deep of their hearts? Most probably both…

Antonis Samaras must be the only leader across the globe who officially joined the chorus of Nigel Farage  in UK and the anti-Islam movement PEGIDA in Germany. In both countries the xenophobics were sharply criticized and condemned by the political leadership. 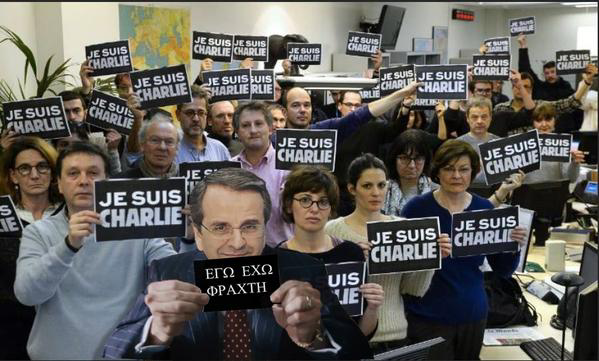 photoshop by @tyrion_t_dwarf  Samaras “I have a fence” i.e. iron fence at Evros river across the Greek borders to Turkey to hinder migrants enter Greece.

PS as the suspected Paris gunmen are said to be French nationals of Algerian descent, Samaras proves also he has absolutely no idea about history…