Referendum YES-supporters will meet Tuesday evening at Syntagma Square outside the Greek Parliament, after NO-supporters organized a huge protest on Monday evening.

YES-supporters are backed by opposition parties like New Democracy and a lot of mainstream media journalists.

And not only! Some Greeks had a very unpleasant experience Tuesday morning when they managed to come closer to an ATM and type their code number, having stood queue since May 2010, or summer 2012, the latets. Instead of three 20-euro banknotes withdawal limit due to capital controls, they got this! 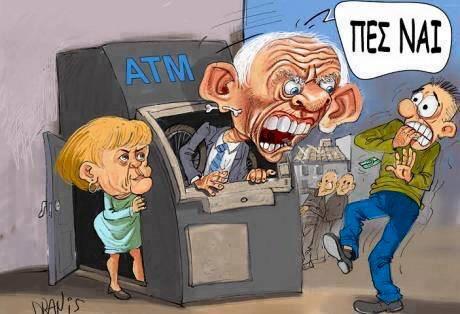 NO-supporters are backed by governing party SYRIZA. Now if the government strikes a deal with creditors tonight, they will suffer a nervous breakdown because they will have to vote YES.

YES-supporters and NO-supporter may all meet at Syntagma Square and raise their voice against all politicians from every ideology,  creditors included.