The Greek Parliament unanimously voted a resolution recognizing the state of Palestine on Tuesday. the voting took place during a special parliamentary session attended also by Palestinian President Mahmoud Abbas currently on an official visit to Athens. 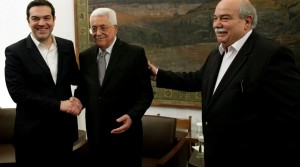 “[The Greek parliament pledges] to promote all the necessary procedures to recognise the state of Palestine and to make every diplomatic effort for the immediate resumption of credible, peace talks between the two sides,” said Nikos Voutsis, the parliamentary speaker,  before asking members to rise for the voting procedure.

The resolution is non-binding and not by the Greek state, so as “not to disturb good relations with Israel”, according to a statement released by the Greek foreign ministry.

Prime Minister Alexis Tsipras said yesterday that as from now, the Greek State will refer on its documents to “Palestine” and not anymore as to “Palestinian Authority.”

During his visit to Israel and the Occupied Territories end November, Tsipras had announced that “Greece supports the creation of an independent Palestinian State with the borders of 1967 and with East Jerusalem as its capital.”

Other European parliaments – such as in Britain, Ireland and France – have passed similar resolutions. The state of Palestine currently enjoys bilateral recognition from 137 nations.

PS I hope the Greek Parliament resolution will not affect Greece’s close relations with Israel and undermine the join projects in the energy sector.