Donkeys as tax evaders: Greek authorities fine them with €4,250

The famous donkeys of Lindos on the island of Rhodes fell victim to tax controls. A hefty fine of more than four thousand euro was imposed to the donkeys for violating the tax law: that is transporting tourists to the Acropolis of Lindos without issue receipts – probably digging huge black holes in the state revenues. 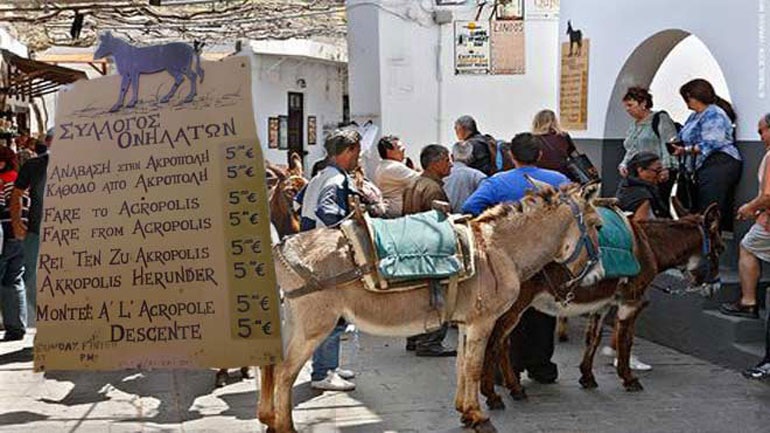 According to local newspaper Rodiaki.gr, two tax inspectors arrived in Lindos two weeks ago and started to audit what stands, flies, crawls and walks. The inspectors went to the local club of “Donkey-drivers Kleovoulos” and started their work: find out tax evasion.

They found out that no receipts had been issued for five transport tickets of 5 euro each (total 25 euro!)  and that the club had not registered its business operation in the local tax office. They confirmed infringement and imposed a fine of 4,250 euro.

The fine triggered strong reaction among the donkey-drivers club but they refrained from going public with their anger. 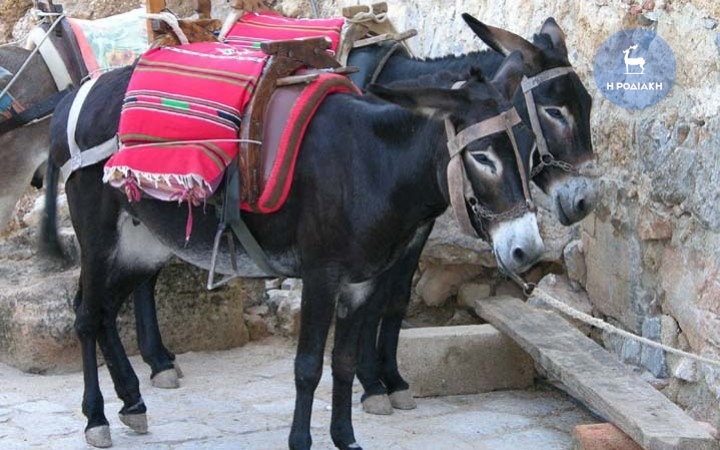 Giorgos Eleftheriou, the chairman of Lindos community with 1,100 registered residents, told Skai TV this morning that the donkey-drivers were in negotiation with the tax authorities to lower the fine.

The Donkey Drivers Club “Kleovoulos” that bears the name of the famous tyrant of Lindos Cleobulus, one of the Seven Sages of ancient Greece,  was established in the 1960’s and owns the donkeys who transport tourists up to the Acropolis of Lindos during the summer months.

No donkeys, no visitors to the Doric Temple of Athena Lindia, dating from  300 BC ...

Mayor Fotis Hatzidiakos sees in the fine “a major blow” to the tourism on the island of Rhodes. “The donkeys are a traditional attraction of Rhodes that started in the 1960’s. They are used by locals, by pensioners or students who want a bit of additional income. That’s why no one thought to see it as a profession for so many years,” Hatzidiakos told daily Ethnos stressing that tax authorities should rather check establishments like the night clubs “with proven tax evasion.”  He adds: “If they expect to combat tax evasion with the donkeys, they are not going to have much of a luck.”

450,000 tourists arrived on the island of Rhodes per charter flights in July. More than 50,000 arrived per cruisers in the same month. How many of them used a donkey to climb up to the Lindos Acropolis and back to the village paying €10 for a two-ways trip? I’m sure nobody can tell really. Only The Club will know about its revenues. Then it will have to subtract first of all the maintenance cost for the donkeys – without ‘fuel’ no donkey can walk up to the Acropolis and back again. Then the club will have to subtract salaries etc etc etc.

Then the club will have to registered the drivers and pay social contributions and add a 24% Value Added Tax on the ticket price, skyrocketing the one way transport price from €5 to €10. Students working with the donkeys will have to pay taxes as wells as the OGA-pensioners on 300 euro per month.

I bet my last euro cent that when the club will try to register the business at the tax office it will find out that tax authorities have no code for such a specific kind of business. Then the club will probably have to pay several thousands of euros to register a business that never existed before as such in the state books and professional categories. Or each doneky will have to get an individual taxation number.

Next step will be that working donkeys will carry a POS device hanging around their neck.

When talking about donkeys… How about the working donkeys on the island of Santorini and all the other donkeys taking visitors up to ancient temples, natural caves and other sites worth visiting achievable only through rough, rocky and rutty paths?

Another aspect of the issue which I failed to add on the original post due to the taxation is, of course, the welfare of the donkeys – who have to work in the heat of the Greek summer often carrying “overweight visitors” as some of my followers mentioned on KTG’s Facebook Page. But tax authorities care less. This is the duty of another department of the Greek state.