A convoy of twenty Turkish tanks entered northern Syria on Wednesday morning almost at the same time US vice president Joe Biden was entering the Turkish Parliament in Ankara, around 11 o’ clock in the morning. 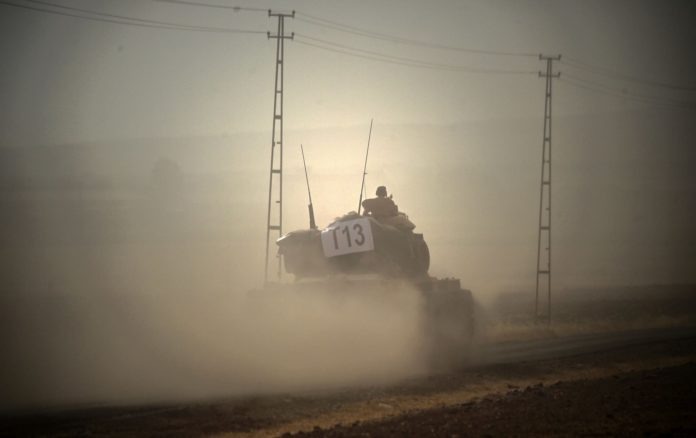 Two symbolic “entrances” that mark the joint Turkey-US operation in Syria: Turkish tanks on the ground, US air fighters in the air.

The joint operation has the code name Euphrates Shield and aims to clear Daesh from northern Syria.

“The Turkish army on Wednesday launched a cross-border operation named “Euphrates Shield” along with the U.S.-led coalition in Syria’s northern border city of Jarablus to clear the area from the Daesh terror organization.”

According to daily Sabah,

Later in the day, tanks crossed the border into Syria and resumed their operation inside Syrian territory.

According to military sources, some 70 targets were destroyed only by the artillery fire and tanks which were stationed on Turkish soil.”

This morning, local and international media spoke of ” a surprise move”.

Surprise? Certainly planned long ago, when Joe Biden visit was announced beginning of the month and President Erdogan had a warm handshake with Russian President Putin.

The Turkish troops launched a massive offensive against ISIS targets in Jarablus,  near the western bank of the Euphrates River, some 3km away from the Turkish-Syrian border, the American Vice launched massive negotiations on whether to extradite the US-based Islamic preacher Fetullah Gulen to Turkey.

The whole regime of President Recep Tayyip Erdogan blames Gulen as the mastermind behind the coup attempt of July 15th.Erdogan put all enemies of Turkey in one bag and shake it again and again. In one breath Erdogan names the enemies of Turkey as  “Gulen, Kurdish PKK, Daesh.”

Interiro Minister Efkan Ala said this morning that “operation Euphrates Shield to clear Jarabulus of Daesh is necessary for Turkey’s security.” He added that the operation “seeks to clearring the area of terrorists and boosting security, and to support the territorial integrity of Syria and would continue until the “terror threat at our border is eliminated.”

The USA is reluctant to extradite Gulen, consequently Ankara plays all the cards it has in its hands.

A kiss with Putin to the East, a kiss and a joint operation to the West. The Ottoman Empire diplomacy is alive and kicking.

Five hundred years ago, on 24 August 1516, the armies of Ottoman Sultan Selim A’, launched an offensive near the town of Dabiq, 44 km north of Aleppo, Syria. The battle was part of the Ottoman–Mamluk War (1516–17) between the Ottoman Empire and the Arab Mamluk Sultanate, which ended in an Ottoman victory and conquest of much of the Middle East, bringing about the destruction of the Mamluk Sultanate. The Ottoman victory in the the Battle of Marj Dabiq gave Selim’s armies control of the entire region of Syria and opened the door to the invasion of Egypt.

Meanwhile it has been announced that the Foreign Ministers of USA and Russia will meet on August 26th in Geneva to talk about Syria and Ukraine.