Breaking News
Home / News / Politics / Trump’s Chief of Staff Priebus: We will go out there and help Greece

Trump’s Chief of Staff Priebus: We will go out there and help Greece

This has been announced by the White House Chief of Staff Reince Priebus during an event organized by the Greek Orthodox church and diaspora Greeks in Washington to honor the new Chief of Staff who has Greek roots.

Taking into consideration that the Trump administration would need two to three or more years to Make America Great again, it will indeed take quite sometime until it will set sail to help Greece.

Thankful for the honor and a medal, Priebus said:

Surrounded by diaspora Greek republicans, Priebus stated his loyalty to Greek Orthodoxy and the Ecumenical Patriarch.

He underlined the importance of religious freedom in Turkey, where the Ecumenical Patriarchate has its seat and  spoke of his vision to see a US President “in the church in Istanbul.”

Priebus was most likely referring to Hagia Sophia. 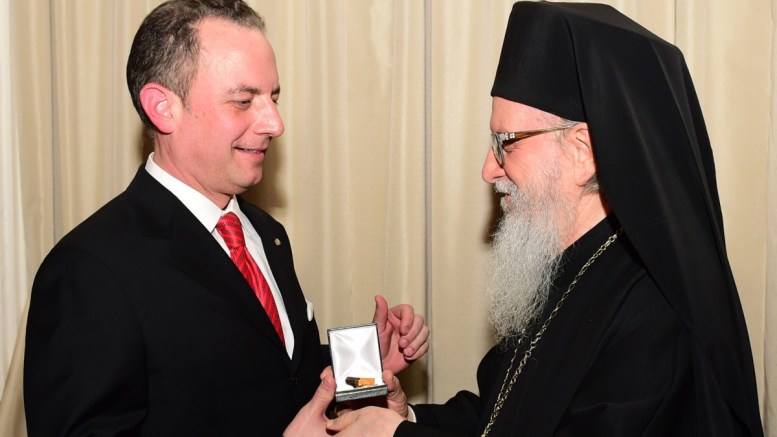 In his speech, Priebus added that

“Nothing happens without God’s will.”

He thanked Archbishop Dimitrios and the powerful Greeks for helping the Republican Party.

Reince Priebus, 44, was born in Dover, New Jersey. His mother is from the island of Levsos, his father form Germany. His appointment had Greeks take a deep breath and hope that the trump administration might look at Greek issues with more interest than previous administrations.

Present at the event was also Greek Defense Minister Panos Kammenos who has rushed to Washington in order to create some important contacts to the new US administration.

The Ecumenical Patriarchate and Religious freedoms in Turkey have always been supported by the US administrations. At least in the last decades – although they lately neglected the issue. President Bill Clinton had indeed visited Hagia Sophia in 1999 – but he was a Democrat.

PS I need to quickly check whether Republican George Bush the Senior had paid a visit to “the church in Istanbul” when he visited Turkey in 1990.