President-elect Donald Trump picked Reince Priebus, the chairman of the Republican National Committee, to be his White House chief of staff. According to some US media, the 44-year-old Priebus was the only candidate for the position.

“It is truly an honor to join President-elect Trump in the White House as his Chief of Staff,” said Priebus. “I am very grateful to the President-elect for this opportunity to serve him and this nation as we work to create an economy that works for everyone, secure our borders, repeal and replace Obamacare, and destroy radical Islamic terrorism. He will be a great President for all Americans.

The appointment was made on Sunday and it might have cheered up Greeks as the man is the most powerful position in Trump’s cabinet has Greek roots. His mother is from the famous Lesvos village producing one of the best Ouzo Plomari, his father is German. Reince Priebus was born in Dover, New Jersey. 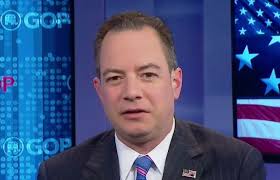 Will Priebus promote the Greek national issues? there is no guarantee for this. there were also US-presidents’ advisors and cabinet members of Greek origin who did fairly little for the Greek cause, whatever this was in the given times of history.

US-media note that “Priebus maintained a close relationship with Trump during the chaotic 2016 presidential election campaign, urging the businessman to tone down his controversial comments while repeatedly pleading with his party members to unite behind their nominee.”

During Trump’s victory’s speech early Wednesday morning, the president-elect singled out Priebus for his assistance during the campaign, saying, “Reince is really a star and he is the hardest-working guy.” 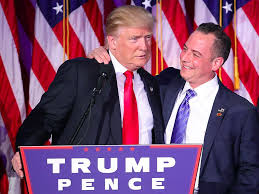 The position of chief of staff is a hugely influential role during any administration, with the office-holder serving as a form of gatekeeper to the president and providing advice.

In order to maintain the balance in his cabinet, Trump appointed also former campaign chairman and conservative media firebrand Steve Bannon his chief strategist and a senior counselor on Sunday.

John Weaver, the top campaign strategist another Republican presidential contender tweeted about Bannon as “the racist, fascist extreme right is represented footsteps from the Oval Office. Be very vigilant America.”

While the world is awaiting for the rest of Trump’s cabinet, a conservative US website reveals that the president-elect’s top military adviser Lt. Gen. Michael Flynn, is lobbying for obscure company with ties to Turkish government and to president Recep Tayyip Erdogan.

The Daily Caller notes that:

The revelation of that new lobbying contract, which has not been previously reported, raises several questions given that Trump is said to be considering Flynn, the former director of the Defense Intelligence Agency (DIA), to take over as either Secretary of Defense or National Security Advisor.

In an op-ed, Flynn recently called for extradition of Fetullah Gulen to Turkey which considers his as the mastermind of the attempted coup of July. He described Gulen as “radical Islamist.”

PS If Trump appoints also Flynn, he will have the perfect balance for the Greek and Turkish relations and issues.