Tension was high when Greek Migration Minister Yannis Mouzalas visited the Ellinikon refugee camp in Athens on Monday morning. As the minister was struggling to enter the occupied area, a policeman punched a refugee boy that was among the crowd of protesters. Mouzalas. wanted to speak with the refugees and migrants who launched a hunger strike on Sunday in order to protest the living conditions in the camp.

The protesters did not allow the minister to enter the premises. Crowds of angry people surrounded him chanting Go Away!.

Children had climbed at the iron entrance door. 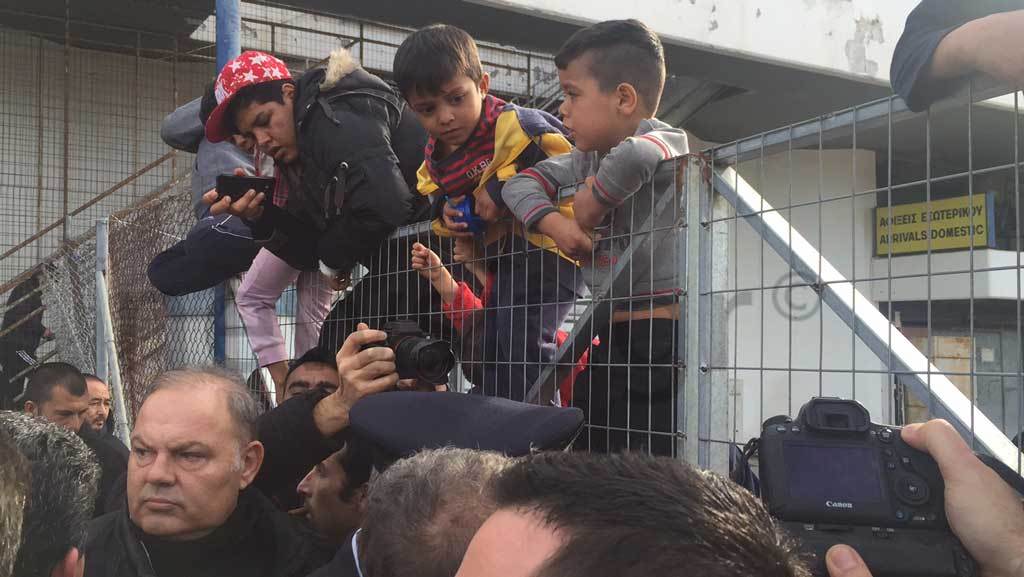 Fathers were holding their infants in the air.

Police was trying to protect the minister standing at the iron fence.

In the middle of this pandemonium of anger and noise, a Greek policeman punched a refugee boy in front of the cameras with the minister just a few inches away.

It looks as if the policeman was trying to push his way to the minister and the boy was standing in his way. The policeman repeatedly punched the boy that punched back.

Mouzalas insisted to speak with the protesters, he finally persuaded to open the gate to the hall under occupation.

A little later, when the minister managed to enter the premises together with reporters, he said that there was no hunger strike in the camp. He accused volunteers’ non-governmental organizations for having incited the whole issue, thus misleading the media and the public and manipulating the refugees. He said that the solidarity volunteers offer bad services to the refugees. He also accused the media for disseminating the hunger strike news.

The Minister said that the refugees “have things that they did not have back in their homes” and urged those who are not satisfied with the living conditions to go. “whoever feels oppressed here, should go and face the consequences,” Mouzalas sadi adding the laws are the same for Greeks and refugees.

When asked about the punches, Mouzalas said that he did not see the incident.

On Sunday, more than 200 refugees and migrants launched a hunger strike to protest the appalling living conditions in the tent camp in the premises of the airport in the south of Athens.

Among others, they demand the gradual relocation of those in need to apartments within the city, school access for the children living in the camp, translators to accompany them in the hospitals when needed and something as simple as hot water..

The protesters occupied the hall where a catering company supplies the people of the camp with meals.

In the three facilities of the Ellinikon camp, there are 1,300 refugees and migrants mainly from Afghanistan. 600 people are reportedly in the hall which is under occupation.

State broadcaster ERT said on Monday that it was only a group of 30-40 people creating tension, while the rest of the refugees and migrants had their lunch as usual.

Earlier, I had heard on Skai TV that an Afghan translator was sent to the camp, while the camera showed a bus taking children to school.

ΚTG understands that also the children from Ellinikon camp are enrolled to the education system for refugee children that started in September 2016.