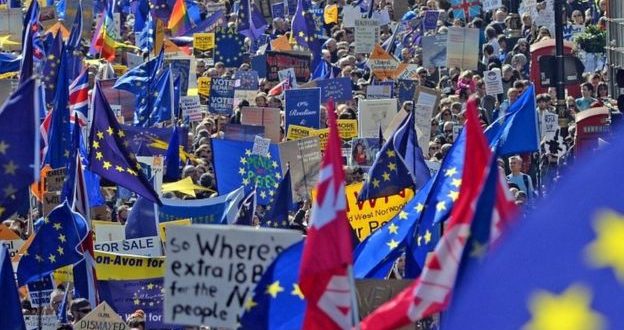 Tens of thousands of people joined a march against Brexit in London on Saturday and called for Britain to remain in the European Union. The march Unite for Europe tooks place just days before Prime Minister Theresa May will trigger Article 50 that will initiate the Brexit process from the EU next Wednesday.

The process is expected to last about two years with one of the tough bargaining cards to be the rights of UK nationals in EU and of EU nationals in UK.

There are thousands of people who feel devastated about the perspective of UK leaving the EU. Not only UK citizens. Expats living and working in Greece, Spain, Italy, France and other EU member countries. I know a lot of people, readers of KeepTalkingGreece who feel desperate about the Brexit. One of them, an expat  lady living on a Greek island, forwarded to me the letter below – an initiative by UK citizen Alison Cuff who also opened a group on Facebook.

Letter to the EU

A Group Opposed to Brexit

There is a large and growing movement in the UK against Brexit. A lack of coverage in the UK media gives the impression that we do not exist. People who are against Brexit have sometimes found that pro-Brexit Members of Parliament (MPs) have blocked them on social media, seem to be ignoring email and letters, and are refusing to meet anti-Brexit constituents. Many of these MPs were pro-EU but have changed sides since the 2016 Referendum, either because of the untruthful Government claim that Brexit is “the will of the people” or because they are afraid to disagree with the party line set by their leaders.

We, the undersigned, are concerned that our fellow EU citizens have gained the false impression that the majority of United Kingdom citizens are pro-Brexit. We therefore wish to make it clear that, in fact, it was only 52% of voters who voted to leave the EU, which is significantly less than half the full electorate and around a quarter of the total population. This contrasts with the ‘overwhelming majority’ that the Government is claiming. It is also significant that the UK government did not allow many UK citizens living in your country to vote and that 16 and 17-year-olds were excluded, as were non-British EU citizens living in the UK.

The strong pro-EU lobby is trying hard to prevent Brexit through lobbying and protesting, but is ignored by a largely anti-EU press and obstructed by well-funded nationalist pressure groups. We value the peace, prosperity and stability which the EU has brought to Europe since it emerged from WW2 and, of course, the Union’s collaborative nature. In particular, we cherish freedom of movement, human rights, employment rights, consumer rights, environmental protection, scientific and medical collaboration, and educational and cultural exchanges. We recognise, too, the importance of the Single Market and Customs Union, and the fact that the EU has a powerful voice in world affairs.

We hope that Brexit can be avoided but, regardless, we will continue to strive to protect the rights and dignity of EU citizens in the UK and of UK nationals in EU countries. Rest assured that we truly value our EU citizenship and we will not give it up readily. Indeed, with Article 50 likely to be activated this month to initiate Brexit negotiations, a broad and robust campaign to re-join after an anticipated (but not definite) formal exit in 2019 is already beginning.

Please spread the word that millions of UK citizens wish to remain in the EU. Approximately 73% of the people did not vote to leave. Any support that you can give us would be greatly appreciated.

There are currently more than 300 signatures on the copy of the letter KTG received.

The letter was translated in several EU languages with strong UK Expats communities and was sent to mainstream media.

I have no information tell how many of them and in which countries the letter was published.

The Group on Facebook is named Letter to EU.

I suppose you can add your signature or simply support the cause.