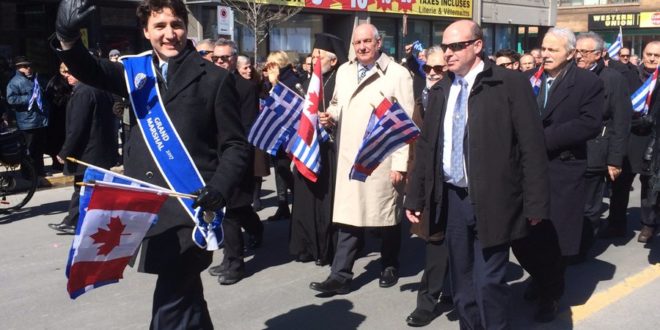 For over 40 years, thousands have gathered in Montreal to celebrate Greek Independence Day with a parade. This year, Prime Minister Justin Trudeau, who has attended the parade in the past, opened the march as Grand Marshal of the festivities.

Trudeaus was greeted with enthusiasm and he for ten minutes he was greeting the people saying in Greek “Many happy returns! Long live Greece, Long Live Canada!”

The Prime Minister of Canada, Justin Trudeau, added another title to his name Sunday, as he took part in Montreal’s annual Greek Independence Day parade.

While it wasn’t the first time the prime minister took part in the festivities, this year he was named Grand Marshal.

The parade has been a Montreal tradition for over 40 years and attracts thousands of spectators, who flock to Park-Extension to take in the sights and sounds.

Georges Rigas, who was dressed in traditional costume, said he’s been coming to the parade since he was 3 years old.

This year, he was marching with his dance troupe.

For Rigas, the parade is about celebrating the storied history of a young nation.

“Our country is only about 200 years old but our history goes back thousands of years,” he said. “We went through so much. It’s one story out of so many that we have.”

The parade is something that most Greek Montrealers look forward to every year.

For Demetre Costopoulos with the Hellenic Community of Greater Montreal, the parade is about remembering the sacrifices of those who came before.

“The parade is regarding our Independence Day in 1821 from the Ottoman Empire,” he said. “We have to remember these people. They fight for us to be free.”

Despite the sun, temperature was at -16 degrees Celsius.

PS No wonder the 45-year-old Canadian politician is so popular.