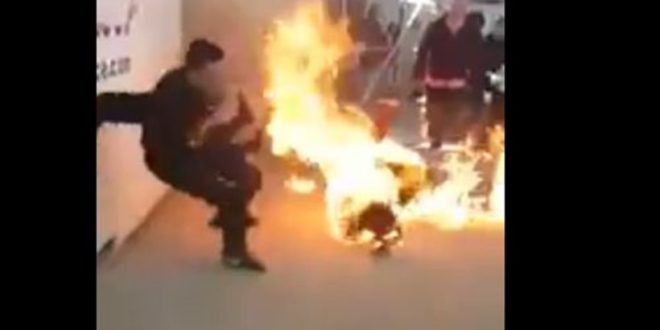 A Syrian refugee set himself on fire in the hot spot of VIAL on the island of Chios on Thursday noon. A policeman who attempted to save him was also injured though slighter than the man.

The refugee is in critical condition as he suffered severe burn injuries 85% of his body. He was rushed to the local hospital, medical personnel provided every possible assistance. He is awaiting to be transferred to a specialized hospital in Greek capital Athens.

Transferred to the local hospital was also the police officer who rushed to save the man on fire.

The policeman has reportedly suffered burn injuries 3% of his face and 7% in his hands (?). He will most likely also be transferred to Athens for better treatment.

According to information obtained by local media, the 29-year-old Syria refugee arrived on the island on March 22, 2017.

Seventy refugees and migrants arrived on Chios on Thursday morning and another 68 on Wednesday.