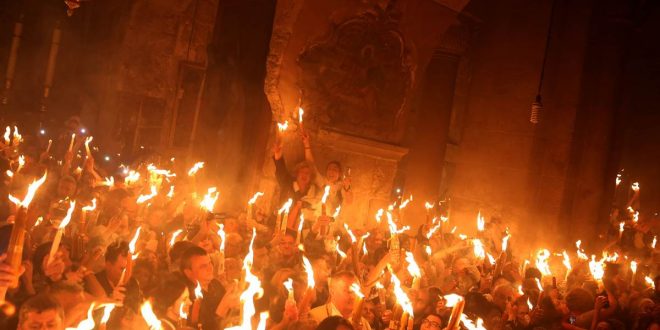 The Miracle of Holy Fire (Holy Light) 2017 – Footage from Jerusalem

The miracle of Jesus Christ Resurrection happened again. The Holy Light or Holy Fire appeared in the the Tomb of Jesus in Jerusalem. Orthodox Christians, thousands of pilgrims and locals, rejoice.

The Holy Fire ceremony in the Church of Holy Sepulchre in Jerusalem.

The Holy Fire is the most renowned miracle in the world of Eastern Orthodoxy. It has taken place at the same time, in the same manner, in the same place every single year for centuries. No other miracle is known to occur so regularly and so steadily over time. It happens in the Church of the Holy Sepulchre in Jerusalem, the holiest place on earth, where Christ was crucified, entombed, and where He finally rose from the dead.

It is a real miracle as it occurs at Holy Saturday noon, although the date varies each and every year.

The Holy Light is a miracle that happens once a year, on the day before Pascha, the Orthodox Easter.

A blue light emanates within Jesus Christ’s Tomb.  It is said that the light rises from the marble slab covering the stone bed believed to be that upon which Jesus’ body was placed for burial.

The Patriarch goes alone in the Holy Sepulchre, the small chapel. He wears a plain white robe and holds two candles. The clergy has previously secured that he has no lighter, matches or anything else with which he could light the candles he holds.

The miracle is not confined to what actually happens inside the little tomb, where the Patriarch prays. What may be even more significant, is that the blue light is reported to appear and be active outside the tomb.

Every year many believers claim that this miraculous light ignites candles, which they hold in their hands, of its own initiative.

All in the church wait with candles in the hope that they may ignite spontaneously. Often unlit oil lamps catch light by themselves before the eyes of the pilgrims. The blue flame is seen to move in different places in the Church.

A number of signed testimonies by pilgrims, whose candles lit spontaneously, attest to the validity of these ignitions. The person who experiences the miracle from close up by having the fire on the candle or seeing the blue light usually leaves Jerusalem changed, and for everyone having attended the ceremony, there is always a “before and after” the miracle of the Holy Fire in Jerusalem.

The historian Eusebius writes in his Vita Constantini, which dates from around 328, about an interesting occurrence in Jerusalem of Easter in the year 162.

“When the church wardens were about to fill the lamps to make them ready to celebrate the resurrection of Christ, they suddenly noticed that there was no more oil left to pour in the lamps. Upon this, Bishop Narcissus of Jerusalem ordered the candles to be filled with water. He then told the wardens to ignite them. In front of the eyes of all present every single lamp burned as if filled with pure oil.

Around 385 Egeria, a noble woman from Spain, traveled to Palestine. In the account of her journey, she speaks of a ceremony by the Holy Sepulchre of Christ, where a light comes forth (ejicitur) from the small chapel enclosing the tomb, by which the entire church is filled with an infinite light (lumen infinitum).

There is a lot of skepticism and criticism about the true nature of the Holy Fire.

But it is a matter of faith, after all.

The Holy Fire is taken to Greece with a special flight. It arrives at the Athens Airport around 6:30 pm on Holy Saturday and is welcome with honors appropriate to a leader of a state. Upon arrival, the Holy Fire is distributed and several aircraft carry it across Greece. By 9:30-10:30 pm the Holy Fire has reached all big and small parishes across the country, so that the Resurrection of Christ can be celebrated at midnight.