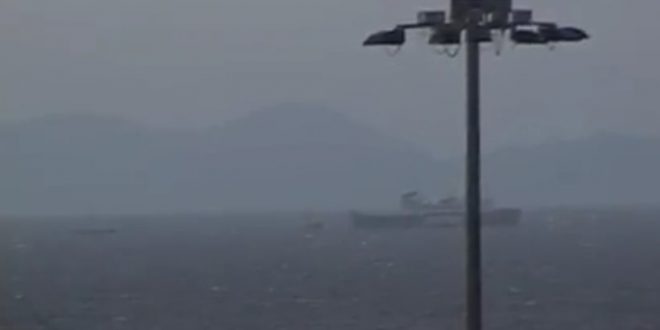 January 18, 2018 weather Comments Off on Ferry breaks away from mooring in Piraeus as gale winds rage across Greece (video) 782 Views

Passenger ferry Panagia Agiasou broke away from the mooring at the port of Piraeus due to the gale-strong winds blowing all through the night.  The ferry is sailing adrift in the area, an operation is underway to tow it to safety. No passenger or crew are on board.

The incident happened in the early morning hours of Thursday, when winds intensity was 8 and even 9 Beaufort. The ferry was anchored south-southeast of the port entrance.

The ferry anchored off the port was spotted to sail adrift and set authorities on alert.

An operation with four tug boats and an open sea boat of the Greek Coast Guard is underway to stabilize the ship and tow it back to the port. The ferry is currently off shore of Neo Faliro.

Representatives from the tug boats company said they can tow the ferry to safety once the wind intensity is has lowered.

According to National Meteorological Service, this is expected to happen later in the day.

Panagia Agiasou, a Japanese ro-ro ship, has been put out of commission since 2013, it remained in anchor.

According to latest information, the situation is currently under control, the ferry poses no risk to other ships and sea traffic in the Saronic Gulf, where currently winds are blowing with intensity 7 and 8 Beaufort.

Just in Two more ships have reportedly broke away from mooring at the port of Elefsina.

Due to the stormy winds sailing has been banned and departures were canceled from several ports across Greece, incl the ports of Lavrio and Rafina in Attica, and majority of sailing schedules from the port of Piraeus on Thursday morning.

Wind intensity is reaching up to 10 Beaufort in the North-East Aegean Sea. Passenger ferry “Nissos Chios” on schedule Rafina-Ai Stratis-Myrina-Kavala had to seek refuge in a bay of the island of Limnos.

“Nissos Mykonos” had to remain anchored at the port of Mytilene, Lesvos, and so did another ferry.

Strong winds blowing with intensity up to 7 and 8 Beaufort have also caused problems in the sailing traffic in the Ionian Sea.

⇒ If you plan to travel by ship or ferry today, Thursday, Jan 18 2018, contact local port authorities and travel agents.

PS I see several container ships roadstead off Palaio Faliro instead of Piraeus and the sea is full of white horses – or little sheep as we say in Greek.