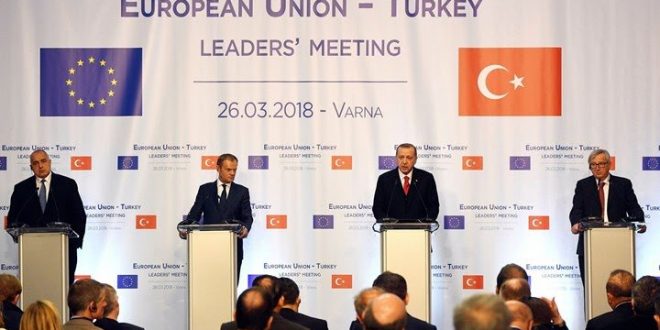 Human rights in Turkey, the operation in Afrin, recent actions in the east Mediterranean Sea – see Cyprus  – and the detention of EU citizens including the two Greek soldiers are main points of concern for the European Union. And so they recorded in the remarks of EU President Donald Tusk, in a statement issued after the EU-Turkey Summit in Varna. 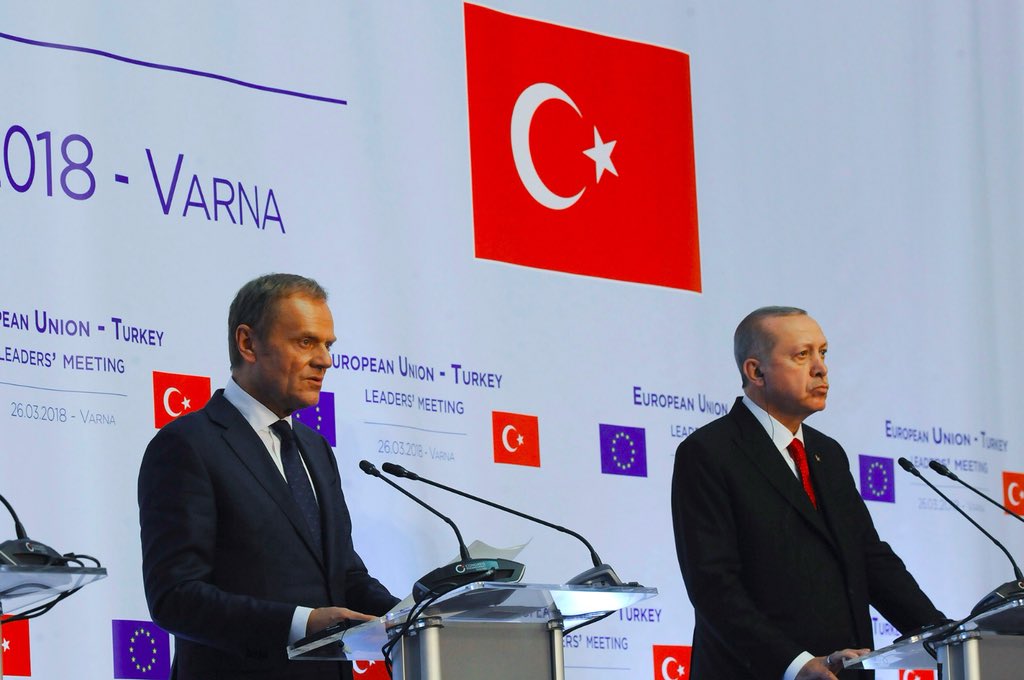 But apparently Turkish President Recep Tayyip Erdogan did not bother to adequately address these issues or make some kind of promise. all he wanted to secure was the EU funds for the refugees in Turkey.

“We didn’t achieve any kind of concrete compromise today,” European Council President Donald Tusk told reporters during the press conference after the talks.

“But I still hope that will be possible in the future… Only progress on these issues will allow us to improve the EU-Turkey relations, including the accession process.”

Speaking at the press conference, Juncker said that Turkey must make an effort to resolve the issue of the two border patrol officers, who were detained for crossing into Turkish territory earlier this month.

He expressed the EU’s confidence that the issue would be resolved, if possible before the Greek Orthodox Easter.

“We trust that the Turkish authorities will resolve this issue in a just way, and I hope this issue will be resolved before the Orthodox Easter this year,” Juncker said.

Juncker also said that if Turkey wishes to progress on its EU accession, it needs to improve its relations with members states within the EU, in particular with Greece and Cyprus. The Commission president stressed that he “was never in favor of stopping negotiations with Turkey” and underlined he supports the country’s efforts to join the EU.

Protesters in Varna: “Erdogan out of Europe”

Today’s EU-Turkey meeting reaffirms the importance both sides give to our relationship.

At our meeting in Brussels last year we agreed to intensify our dialogue at different levels. Since then a number of high level meetings have taken place between the EU and Turkey. This evening we took stock of where things stand and set out some parameters for the future.

On migration and support for refugees, the EU and Turkey remain very close partners. I would like to express our appreciation for the impressive work Turkey has been doing, and to sincerely thank Turkey and the Turkish people for hosting more than 3 million Syrian refugees these past years. The EU has lent substantial support to improve the livelihood of these refugees, and this evening we reaffirmed the European Union’s unwavering commitment to continue this support.

As an EU candidate country, Turkey has committed to developing and upholding the highest standards of democracy. We understand Turkey’s need to deal effectively with its security after the attempted coup and the terrorist attacks it has suffered. But we are concerned that some of the methods used, undermine fundamental freedoms and the rule of law in Turkey. We encourage Turkey to work with the Council of Europe, of which Turkey has been a member longer than most EU Member States. The EU also stands ready to assist.

Good bilateral relations with EU Member States are also an important commitment within the accession process. We welcome positive progress in recent months with some of our Member States, but still have serious concerns about inter alia recent Turkish actions in the Eastern Mediterranean and the Aegean Sea as well as the detention of EU citizens. The European Union stands united behind the Republic of Cyprus regarding its right to explore and exploit its natural resources in its Exclusive Economic Zone. This is also important in view of our shared objective for the successful reunification of Cyprus for the benefit of both populations on the island, for Turkey, the European Union and for EU-Turkey relations.

We also had a discussion this evening on working together in the field of counter-terrorism. We want to expand our cooperation with regard to Foreign Terrorist Fighters; another area where we share important security interests.

We also expressed our concern with Turkey’s actions in Syria, in particular the situation in Afrin. Escalating violence and displacement in an already tragic and volatile situation must be avoided. And we recalled Turkey’s responsibility to ensure the protection of civilians and the delivery of humanitarian assistance to all those in need.

Let me end by thanking President Erdoğan for coming to Varna. Our meeting today demonstrated that while our relationship is going through difficult times, in areas where we do cooperate, we cooperate well. We reconfirm our readiness to keep up the dialogue and consultations and to work together to overcome current difficulties with a view to unleashing the potential of our partnership. I remain fully committed to assisting in this process. Thank you!