Breaking News
Home / News / Politics / Greece / Athens: Protesters burn US flag outside embassy as they march in against Syria strikes 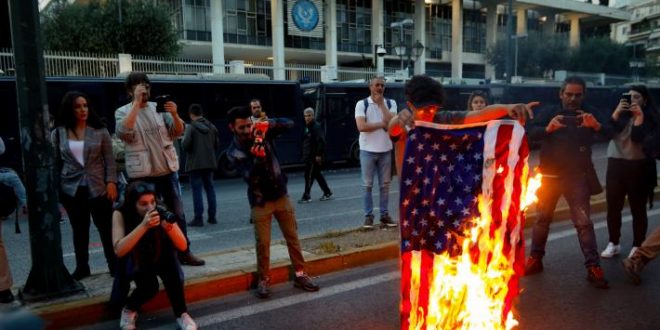 Athens: Protesters burn US flag outside embassy as they march in against Syria strikes

Thousands of Greek marched through downtown Athens and to the building of US embassy to protest US-led strikes in Syria on Saturday. The protest was organized by Communist Party KKE. 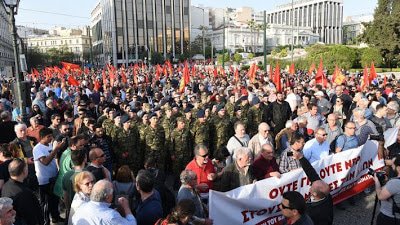 The protesters chanted slogan anti-U.S. slogans but also against the NATO and the EU.

Right in front of the embassy building they set an American flag on fire.

It was interested to see also soldiers in uniform participating in the protest.

The central banner was reading the “Greek government is supporting this crime serving the interests of capitalists.”

Among the slogans were heard “No the the intervention in Syria,” and “USA-NATO-EU are making the peoples bleed.”

Some wrote on the pavement in red paint: “Americans, murderers of people.”

Dimitris Koutsoumbas, the Communist Party’s general secretary blasted Greek politicians for believing “flimsy excuses about a use of chemical weapons” by Syria. He also criticized their “subservience” to the EU and NATO, as well as their support for Israel.

He told the crowd “the imperialists once again spill the blood of the local people. They destroy and splinter states by using fabricated evidence.” (sources: protest on twitter & ap)