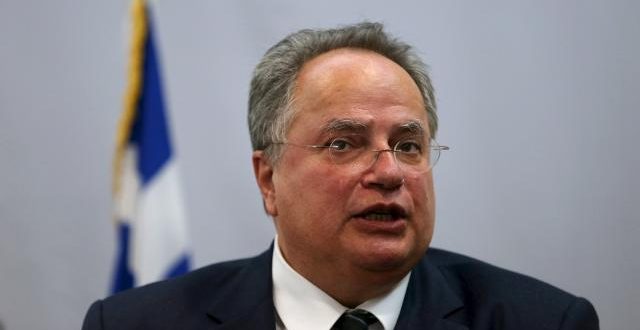 The President of the Pan-Hellenic Federation of Macedonian Associations has filed a lawsuit against Foreign Minister, Nikos Kotzias, for treason over the Macedonia name issue. The lawsuit has been filed as  Greece and FYROM seem to be very close to an agreement based on component name that includes the term “Macedonia.”

The President of the Associations filed the lawsuit at the court of Serres, in Northern Greece, earlier on Thursday.

According to the lawsuit, Minister Kotzias has conducted several acts of  treason from the moment he handed over the name of Macedonia during negotiations with his FYROM counterpart under the auspices of the United Nations.

“We indigenous native Macedonians are forced to resort to justice in order to seek protection from the unhistorical and future unsafe delivery of our name in the neighboring state of the Slav-Albanians, ” the Association said in a statement adding that they feel “ashamed” and “betrayed”.  Foreign Minister, Nikos Kotzias, “has violated every meaning of democracy by ignoring the will of millions of real Greeks who participated in protest rallies, refusing to meet with real Macedonians on this issue, ignoring the decisions of several municipalities in Macedonia as well as the official position of the Church of Greece and the “Monks’ Republic of] Mount Athos,” the statement said among others.

According to local media, the lawsuit is supported by the Pan-Macedonian Organizations and the Struggle Committee for the Hellenism of Macedonia that also organize new protests in several Greek cities  on June 6.

In the next few days, more lawsuits against Kotzias are to be filed by organizations dealing with Macedonia, thestival.gr reports.

Macedonian organizations have ranted against lawmakers and even sent them death threats last March, should they accept the term in FYROM’s new name.