Breaking News
Home / News / Economy / Erdogan says “They have dollars, we have our Allah,” as Turkish Lira in free fall 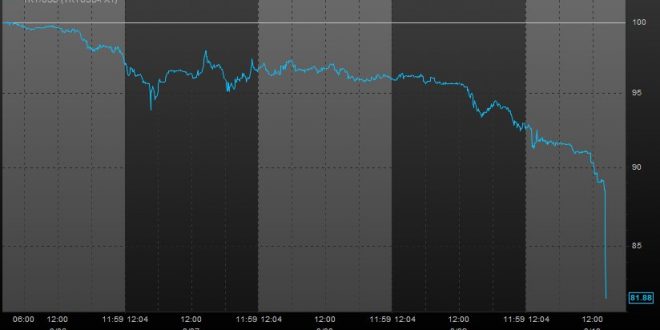 Erdogan says “They have dollars, we have our Allah,” as Turkish Lira in free fall

August 10, 2018 Economy Comments Off on Erdogan says “They have dollars, we have our Allah,” as Turkish Lira in free fall 624 Views

Turkish President Recep Tayyip Erdogan tried on Friday all means to save the Turkish lira. he urged citizens to rush to the banks and convert their deposits in dollar, euros and gold into the national currency. “It is a national struggle. It is going to be my nation’s response to those waging an economic war against us,” he said.

However, Turkish people pretended they were too busy with other issues and turned their back to Erdogan’s national response.

Then the allmight President revealed that his son-in-law, Treasure and Finance Minister Berat Albayrak is going to present a new economic plan to take Turkey out of the financial impasse.

The longer Erdogan spoke, the deeper the Turkish Lira plunged.

The new set of economic steps are aimed at securing an economic growth of 3-4 percent in 2019, and decreasing the inflation rate to single digits, Turkey’s Finance Ministry said in a press release.

“It is expected that the current account deficit would be balanced at around 4 percent,” the ministry said, adding that a saving program in the public sector, which was launched this year, will continue in the medium-term.

The ministry added that it will continue to take steps to cut budget deficit to around 1.5 percent of the country’s GDP.

But investors and markets cannot wait for Albayrak’s plan to materialize.

Friday morning the Turkish Lira recorded loses of up to 10 and 12 percent, nearly 20% in a week.

Erdogan’s response to the pressure was radical and to the point: “They may have their dollars, but we have our Allah.”

The Sultan had just invented a new economic term Allhnomics.

As the world is anticipating for Albayrak’s plan….

Lol it's got so bad they are even giving it away for free 😂#Turkey #Turkishlira pic.twitter.com/SA6t96yHcI

The problem is that the free fall of the Turkish Lira is causing problems also to the Euro, as banks in Spain, France and Italy have an exposure of about 135 billion euros.

#Banks in #Spain, #France and #Italy with the biggest claims in #Turkey have an exposure of about 135 billion euros. Not yet a big deal? https://t.co/dGBibeFmHB

“Turkey has not knocked our door,” the international Monetary Fund said on Thursday, responding to speculation about a bailout and possible implementation of capital controls.