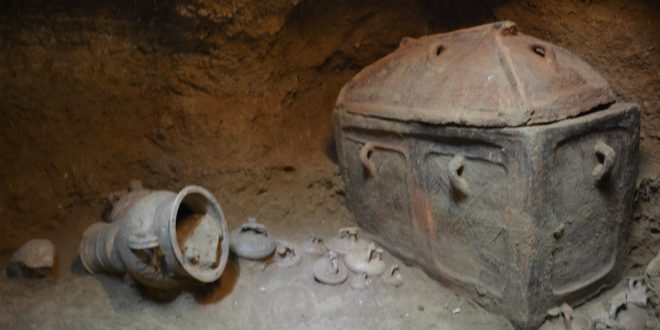 It needed a local farmer, his truck and a parking attempt to have archaeologists unearth an rare treasury, the unlooted chamber tomb dated to the Late Minoan IIIA-B period by Ierapetra, Crete.

The chamber tomb can be dated approximately from 1400 to 1200 BC, the Greek Culture Ministry said on Thursday in a statement about the underground tomb in an olive grove at Rousses, about 800 meters northeast of the village Kentri in Ierapetra, south Crete. 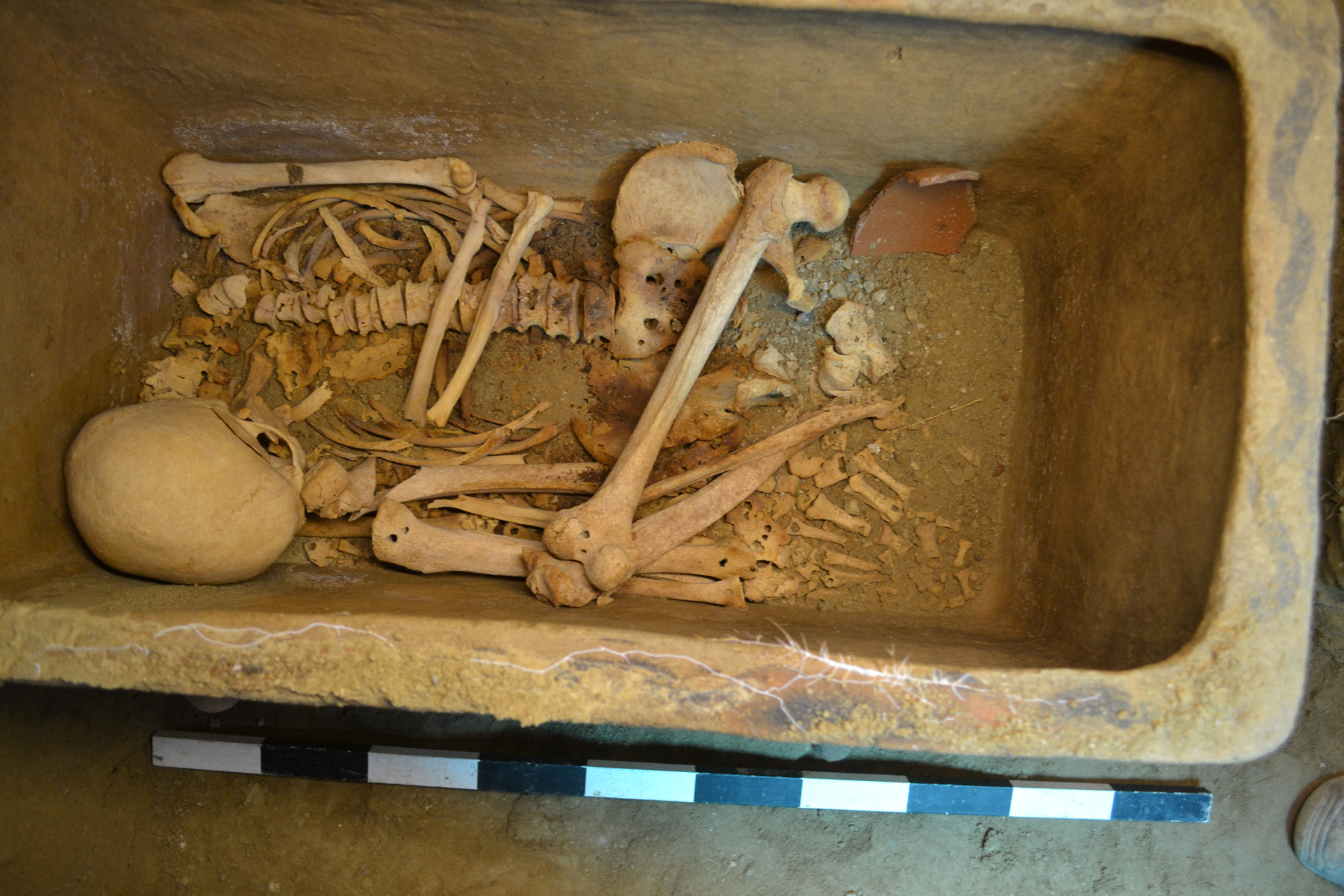 The chamber tomb contains a coffin with a well-preserved skeleton of an adult in a flexed position as well as vessels in an excellent state of preservation was excavated in the area of Ierapetra by the Lassithi Ephorate of Antiquities.

According to the ministry statement the tomb was found during a salvage excavation conducted in an olive grove located at Rousses, about 800 meters northeast of the village of Kentri, Ierapetra. 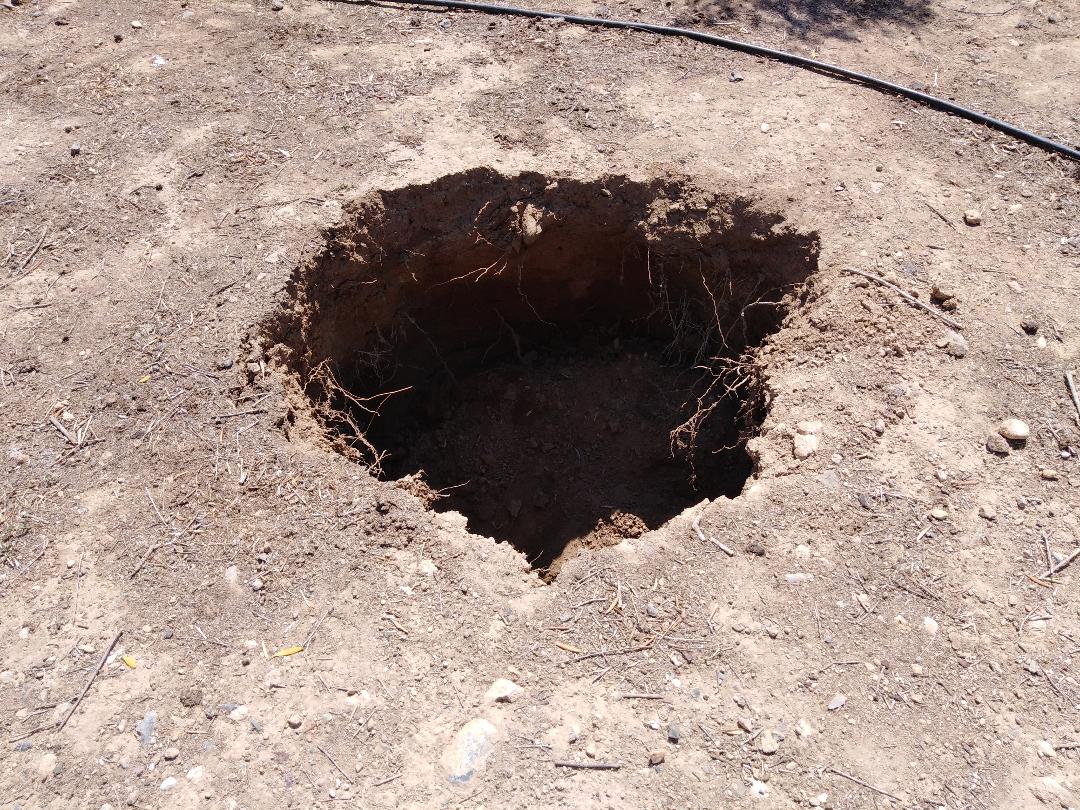 A pit with a diameter of 1.20 meters and a depth of more than 2.5 meters was excavated in the grove after which “a chamber tomb was discovered, dug into the soft limestone of the area. The access to the tomb was made by a vertical trench, while the entrance was sealed by stone masonry.”

The interior of the tomb was divided into three carved niches.

An intact coffin with the cover in place was found in the most southern one. The well-preserved skeleton was found inside. 14 ritual amphorae, an amphorae crater with an inherited fact and a bowl were found in front of the coffin.

In the northern niche was found another container with another adult skeleton and additional vessels near it. All vases are intact, of good craftsmanship and in an excellent state of preservation.

The announcement said that “according to the ceramic typology, and according to the first estimates, the tomb can be dated to the Late Minoan IIIA-B period, approximately from 1400 to 1200 BC.”

“The location of the tomb is due to a random incident and the suggestion to the Lassithi Ephorate of Antiquities was made by a resident of the area,” the ministry satetement said adding that close to the excavation, there was evidence of another tomb, and research continued, but this did not prove to be the case.

The tomb was discovered beginning of August when a farmer tried to park his vehicle in an olive grove and the soil gave in. 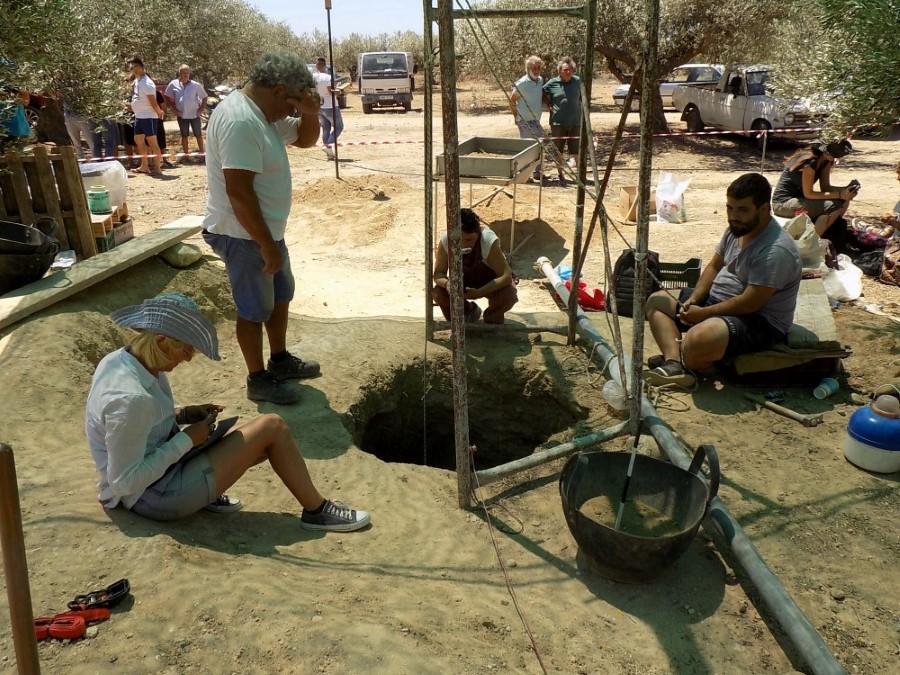 The farmer informed the local archaeology authorities, a group of Archeology students from the Kapodistrian University of Athens quickly joined the research team of experts. 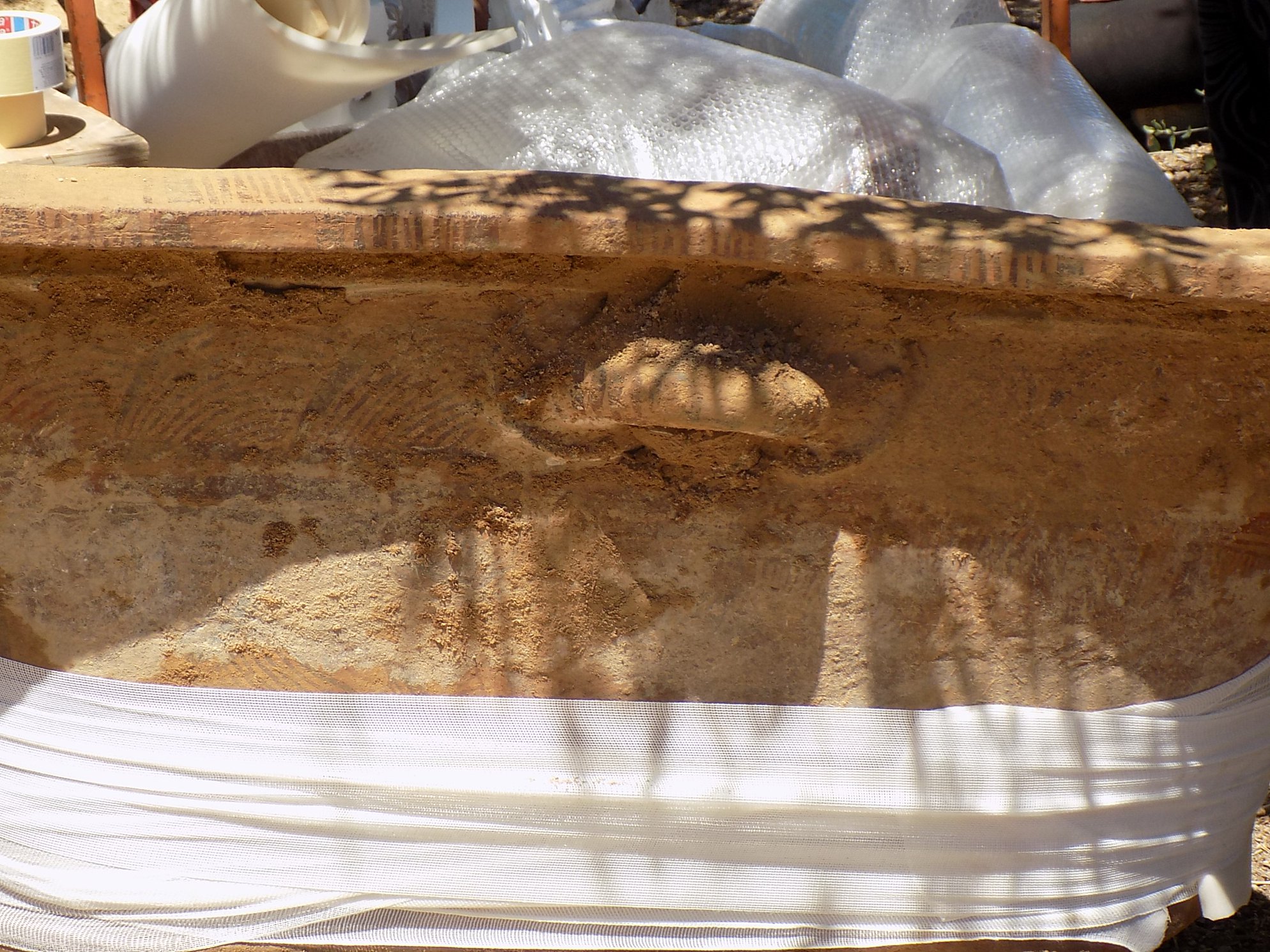 Part of the olive grove around the pit turned into an archaeological site. 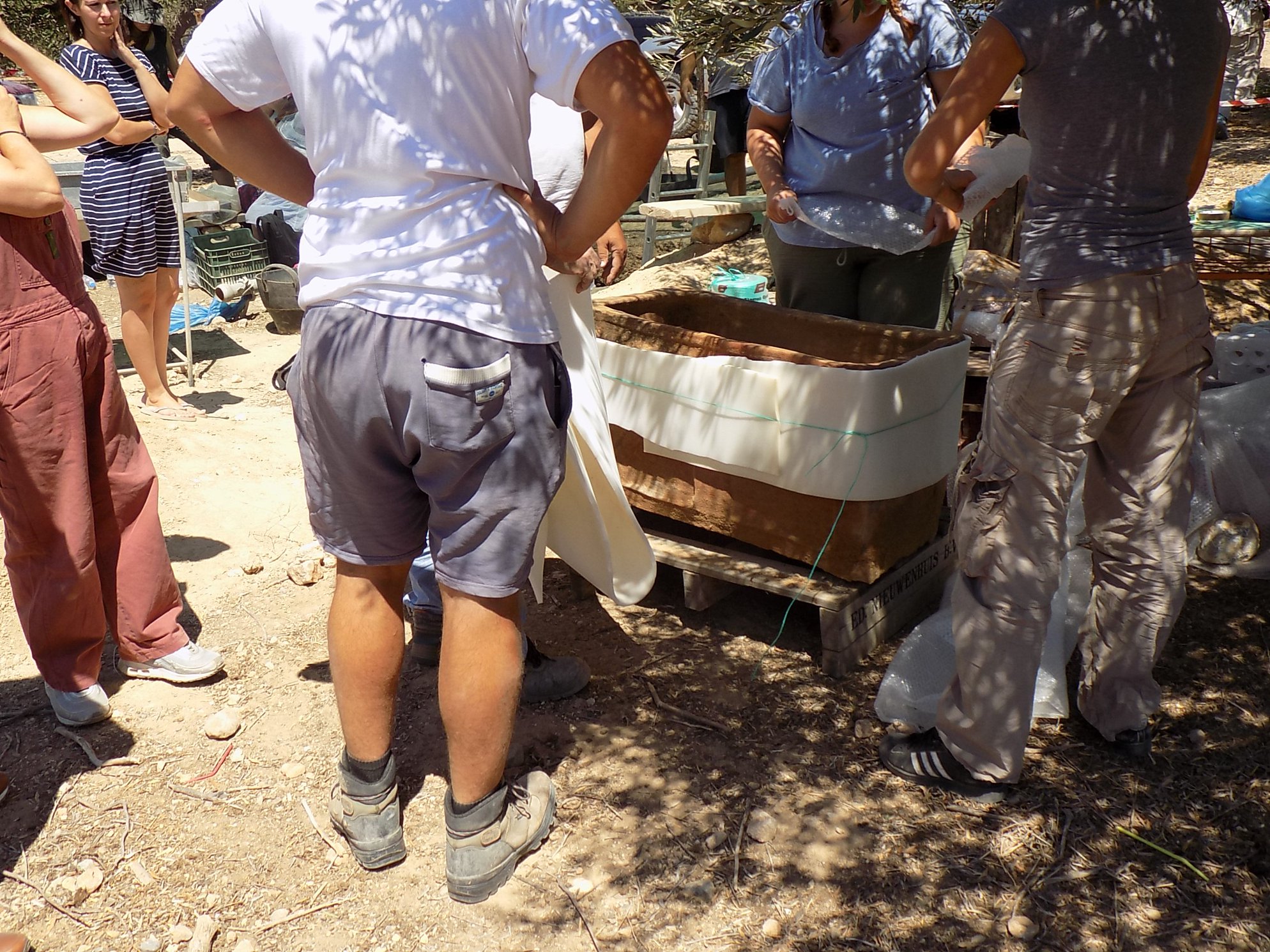 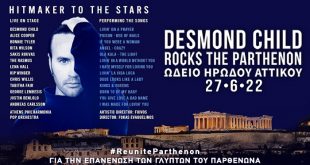 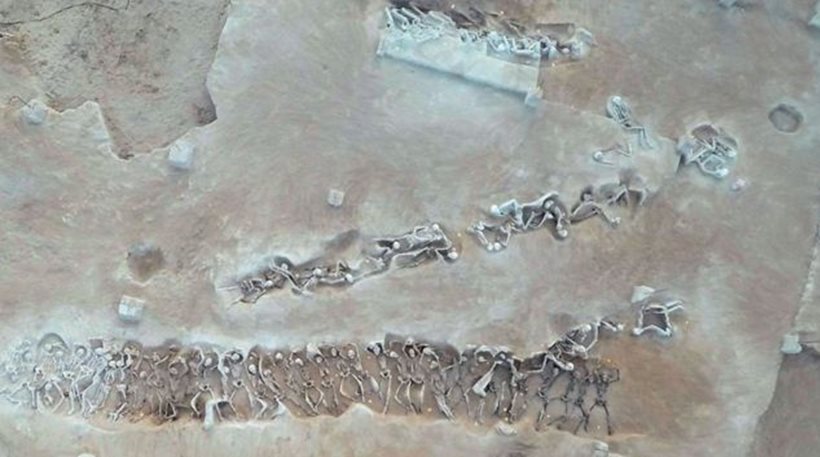 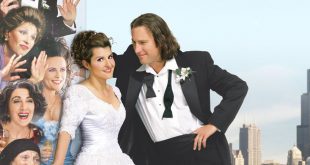 The cult film by Nia Vardalos, the sequel: My Big Fat Greek Wedding 3, was …