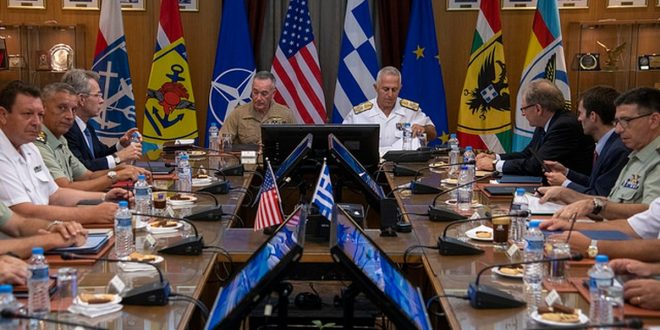 US looks to expand is military presence in Greece, says Gen Dunford

The U.S. is looking to further expand its military presence in Greece, including increasing access for US aircraft and ships and joint exercises, Chairman of Joint Chiefs of Staff Gen. Joseph Dunford told reporters during his visit in Athens on Tuesday. However, the US is not seeking for a large military base in Greece dismissing a scenario the US may move the Incirlik base from Turkey to the West.

The chairman of the Joint Chiefs of Staff said he very much welcomed seeing the Eastern Mediterranean region “through a Greek lens” as he finished consultations with his counterpart, Greek navy Adm. Evangelos Apostolakis, the chief of the Hellenic National Defense General Staff.

Marine Corps Gen. Joe Dunford told reporters traveling with him that the bilateral relationship between the two NATO allies “is probably as good as it has been in many, many years.”

Dunford and Apostolakis discussed the situation in the region. Greece looks north into the Balkans, east to the Middle East and south into Libya and the rest of North Africa. “[He] shared some thoughts about the region, and I greatly benefited from the perspective of the Greeks, who have a regional view,”  Dunford said..

The Greeks are open to increasing military cooperation with the United States, he said. “[They] made a general overture saying they would be willing to consider that, and I certainly was enthusiastic about the possibility,” Dunford said.

U.S. European Command and the State Department will work with Greek ministries to continue these conversations, he said.

Dunford said hearing directly from the Greek military about their experiences with the refugee crisis gave him a better appreciation of the scope of the problem and the capabilities they brought to bear on it.

“They also have some interesting perspectives on the Russian naval presence in the eastern Mediterranean, as well,” he said. “I think we both agreed that we are seeing something we haven’t seen since the 1980s in terms of the operational patterns of the Russians in the area.”

The two leaders talked about the importance of sharing information and intelligence particularly in the area of counterterrorism, the chairman said.

Dunford said the Greek defense chief “expressed interest in expanding our access to their bases.”

This access can be used to move personnel and equipment in and out of theater.

“We … have taken advantage of Souda Bay — it’s a critical piece of infrastructure here in the region, and Greece has also been open to expanding training opportunities for our forces that are stationed in Europe, in particular for U.S. Army units to do training with helicopters,” he said.

Finally, Greece also plays a unique role in the region in terms of bringing together multinational exercises. The United States is certainly amenable to participating in those exercises, Dunford said.

The U.S.-Greek relationship is in “a very positive place” today, a senior government official said here on background today, and the foundation to this turn of events has been the defense relationship between the two nations.

Greece has suffered through an economic crisis from which the country is still recovering. Yet the nation continued to spend 2 percent of gross domestic product on defense — a benchmark for NATO members. 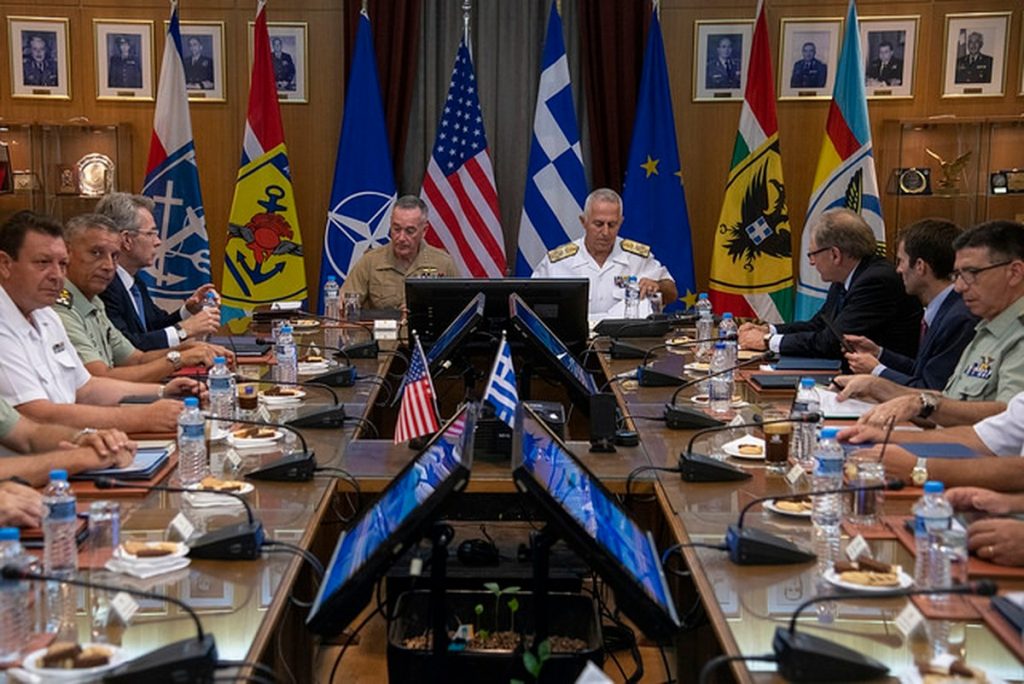 “The Greeks live in this neighborhood and they have been looking around and seeing the same instability that we have,” the official said.

Greece is nervous about NATO ally Turkey and want that country to remain firmly rooted in the West, the official added. They also confronted the refugee crisis with limited resources, but see the possibility of it continuing.

“They are deeply concerned with what is happening in Libya and Africa, because even if Syria stabilizes, you’ve got Africa that is right on their doorstep,” the official said.

The Greeks, too, are worried about what the Russians are up to in the Black Sea and the Eastern Mediterranean, the official said. “They are looking around, and the U.S. is still the best partner available to them.”

The U.S. Air Force is now operating MQ-9 Reaper unmanned aerial vehicles at Greece’s Larissa Air Force Base. The unarmed UAVs will focus on information-gathering, surveillance and reconnaissance in the region.

Both Dunford and the official said the United States is not looking for large bases in Greece. The U.S. footprint in the country will remain light. But there will probably be more American service members rotating in and out of the country for training, education and exercises, the US Department of Defense said in a statement.

According to militarytimes, other US officials told journalists that no specific bases have been identified, but that Supreme Allied Commander Europe Army Gen. Curtis Scaparrotti is evaluating several options for increased U.S. flight training, port calls to do forward-based ship repairs and additional multilateral exercises.

“Those are discussions that Gen. Scap and others are having right now, as they look around the region in terms of where they want to put forces” within the next five to 10 years, one official said.

Despite its own economic crisis, Greece has also continued to spend 2 percent of its GDP on defense, including signing a $1.5 billion contract with the U.S. to upgrade the avionics in 85 of its 129 F-16 fighter jets, the officials said.

The agreement was signed in the spring, with the final details expected to be completed this fall. Greece is also set to receive 70 OH-58 U.S. Army Kiowa helicopters through the U.S. excess defense articles program and has contracted to upgrade four of its P-3 Orion reconnaissance aircraft, the officials said.