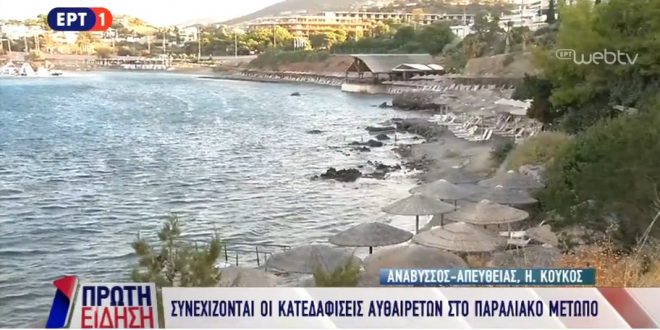 Demolition of illegal beach bar in front of stunned tourists

Customers of a hotel in Anavyssos were stunned to hear police officers urging them to leave the area of the beach bar because demolishing works were imminent. Bulldozers had arrived early Monday morning to demolish four illegal constructed buildings and several kiosk in an area of 100 square meters in the premises of the hotel located at the 47.5 km of the Athens – Sounio highway.

The hotel had extended its beach facilities and had practically illegally and permanently occupied a large part of the beach.

Sunbeds and other equipment at the beach were quickly removed before the demolition started.

The sun-umbrellas need special equipment as they were standing on bases made of cement.

According to state broadcaster ERT, the hotel management had requested a postponement of a couple of days until the last customers had finished their vacations.

The request fell on deaf ears.

The first demolition decision was issued in 1997, two-three more followed. the illegal facilities continued to exist even if it is not known whether the current owner has been managing the hotel through all these years/

The Greek government is determined to proceed with the demolitions of illegal buildings and constructions not only in Attica but also in other regions like Peloponnese, West Greece and the Ionian islands.

In a recent interview Energy and Environment Minister Giorgos Stathakis had announced demolition works along the Athens-Sounion highway, stressing “the bulldozers will be at work on Monday morning.”

At this stage, ten illegal constructions located right at the sea front will disappear for ever.

The minister underlined that for some of these illegal constructions the relevant decision has been issued already 24 to 36 years ago but the decisions were “frozen.”

According to state broadcaster ERT TV, the oldest demolition decision was issued in 1982.

Bulldozers and demolition teams will then move to an entertainment facility in the broader area and proceed with the implementation of a court decision issued in 1982.

Demolition of illegal constructions at the sea front or in forest areas do not affect the Prefecture of Attica only.

Attica is only the beginning in the government plans after illegal constructions and walls along the sea side trapped dozens of people in Mati in July.

Demolitions are soon to start also in other regions and dozens of illegal constructions are reportedly on a list in Achaia and Corinth, Peloponnese, in Aitoloakarnania, West Greece, and Kefalonia in the Ionian islands.

Demolitions of 26 illegal constructions in Loutraki are pending Athens News Agency reported over the weekend.