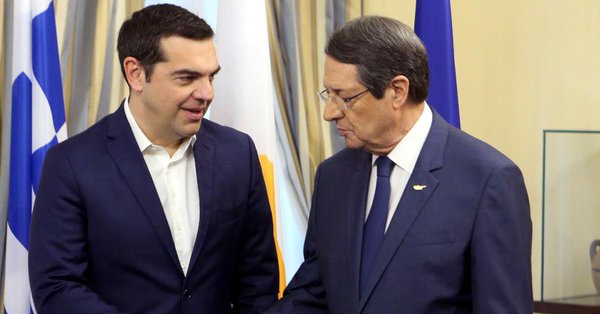 May 9, 2019 Greece Comments Off on Cyprus and Greece seek EU leaders support over Turkey’s provocations 116 Views

Prime Minister Alexis Tsipras and Cyprus President Nicos Anastasiades sought the support of EU leaders at the informal EU summit in Romania over Turkey’s plans to drill for hydrocarbons in the island’s exclusive economic zone.

The European Union must send a clear message to Turkey, so that it stops its illegal activities in Cyprus’ Exclusive Economic Zone (EEZ), Prime Minister Alexis Tsipras stressed.

He added that he had fully support Cyprus President Nicos Anastasiades and that they jointly highlighted Turkey’s illegal actions.

“At the next summits, in May and June, the EU must examine the steps and measures that are necessary if Turkey’s provocative behavior continues. Turkey has to understand that it must come to the table and talk, in the same way as other Mediterranean countries, and not proceed with unilateral actions. I presented Greece’s positions as regards sovereign rights,” Tsipras underlined.

Anastasiades said that he had informed the European Council in detail about all Turkish provocations but especially the most recent “which in my opinion amounts to a second invasion against the Cyprus Republic, in contravention of international law and the law of the sea.”

He reported a good response from Cyprus’ EU partners, saying the support for Cyprus was reflected in the statement made by the European Council president after the summit.