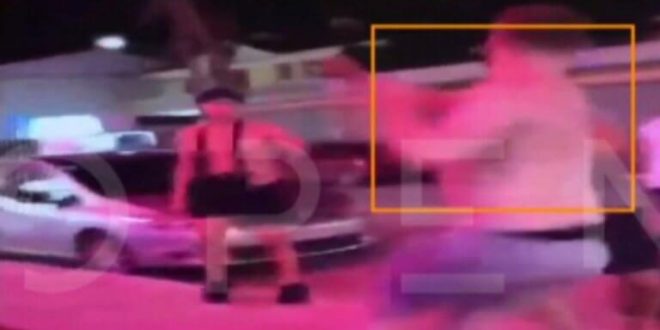 Shocking footage from the brawl in the resort of Laganas that left a 35-year-old Briton severely injured. The video was shot by an eyewitness and was handed out to police that identified the perpetrators.

The video broadcast by private Open TV and uploaded by website newsit.gr, shows the two  perpetrators, also Britons, attacking the victim. After a beat, the father of two falls on the sidewalk and remains there unable to move.

The victim suffered severed injuries in the back of his head and remains hospitalized in the Intensive Care Unit of a hospital in Athens where he was transferred with an Air Force helicopter on Friday, just hours after the incident.

On Thursday night, the victim a local bar in Laganas resort on the island of Zakynthos. For a reason that remains unknown so far, the two perpetrators moved against him and pushed him. Then the three moved outside the bar where the brawl continued.

The attackers fled the scene.

Police arrested them later and took them to prosecutor who pressed charges for “serious body harm.”

According to OPEN TV, the two attackers allegedly claimed that they were drunk.

Still on Sunday, three days after the incident, the victim’s health condition is described as “critical.”