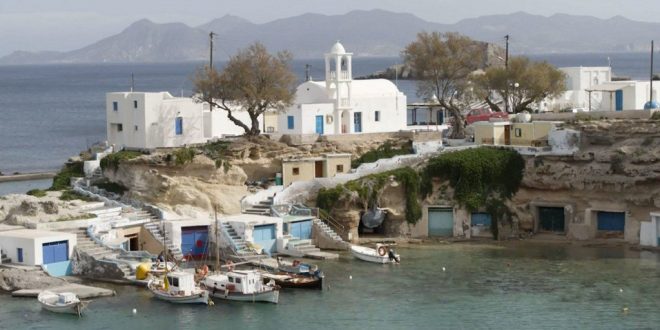 The island of Milos in the Cyclades has been voted as the Best Island in Europe for 2019. According to magazine Travel and Leisure, readers have Milos with 90.50 points the highest score.

“One of the Cyclades, Mílos is known as the place where the famed Venus de Milo statue was discovered. But visitors today still find their own treasures while exploring this 58-square-mile island. Stroll its cobblestoned streets, hike volcanic craters, wander through ruins, or stretch out on the groomed white-sand beaches overlooking turquoise waters. Even the largest town, Adamantas, which has two museums and a multitude of boutique hotels, remains largely free of the crowds prevalent on the other Greek isles. And, as one fan pointed out, “it’s very affordable.” For embodying the finest qualities that European islands have to offer, T+L readers attest that one can do no better.”

Milos has been voted the best island in the world! And it's not hard to see why. #TLWorldsBest pic.twitter.com/kLtrvsspec

In general, Greece rules this list with four islands: Santorini, Páros (last year’s No. 1 pick), Crete, and this year’s winner. Crete (No. 2), the largest of the Greek islands, offers the most diverse attractions. Rent a car and drive its winding mountain roads, passing seemingly endless olive groves and stopping in tiny villages where local grocers sell just-picked figs and freshly gathered eggs — before arriving at one of its many magical beaches. The island’s Minoan history and natural beauty make every day an adventure of visitors’ choosing. The decidedly less-wild Santorini (No. 5), famous for its sunsets and whitewashed buildings, has several five-star hotels, while diminutive Páros — cruise ships can’t enter its harbor — offers an intimate chance to explore off the beaten path.

European culture, history, and food only get better when paired with the relaxation quotient of an island. The spectacular coastlines of the best islands in Europe — five of which were also voted among the 15 best islands in the world — showcase a wide range of terrains, from craggy volcanic cliffs to feather-soft sand.

Every year for the  World’s Best Awards survey, Travel + Leisure asks readers to weigh in on travel experiences around the globe — to share their opinions on the top cities, islands, cruise ships, spas, airlines, and more. Readers rated islands according to their activities and sights, natural attractions and beaches, food, friendliness, and overall value.