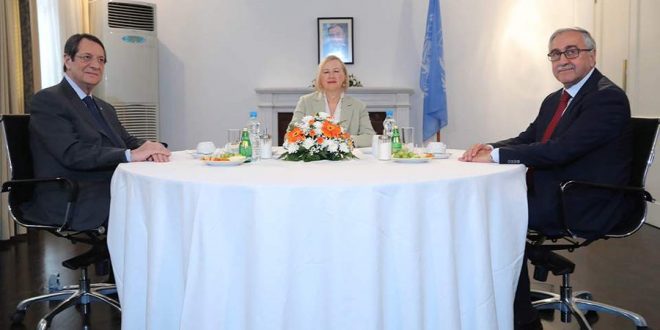 There is common basis for talks, but disagreements on serious issues remain, Cyprus President Nicos Anastasiades said on Friday after a 3-hour informal meeting with Turkish Cypriot leader Mustafa Akinci, the first after long time.

The meeting of took place at the residence UN Special Representative Elizabeth Spehar in the United Nations Protected Area.

In a joint statement issued by the UN on their behalf, the two leaders have announced their readiness to hold a tripartite meeting with the UN Secretary-General in September to plan a way forward to resume talks.

Anastasiades said after the meeting that he was satisfied because his proposal on decentralised powers in a federal state found fertile ground and will be one of the issues discussed at the talks.

He said they also discussed the hydrocarbons issue.

“I first raised the illegal actions of Turkey that question the convergences achieved between the two communities that provide that the sea area of the Republic of Cyprus must be compatible with the law of the sea […] and not what Turkey defines,” he said.

Anastasiades also said he argued why Akinci’s proposal on a joint committee on natural resources cannot be accepted. “Only sovereign states can give licences or make decisions on their exclusive economic zones (EEZs),” he said.

He added he did not just offer the rejection of Akinci’s proposal but made counter proposals that would create the sense of security among the two communities as regards the benefits that would arise from the exercise of the Republic’s sovereign rights in is own EEZ.

Responding to a question by the media he also said he had expressed willingness to inform Akinci on decisions concerning natural gas.

Overall, he said, “what we have concluded as regards the substance of the Cyprus problem is that the prospects and conditions are being created to continue cooperation with Ms Lute to configure the terms of reference despite important differences on some issues” so that there can be a meeting between the two leaders and Mr Guterres to see how to proceed with the aim beginning talks for the solution.

As regards confidence building measures (CBMs), he said he referred to the initiatives taken by Turkish Cypriot ‘foreign minister’ Kudret Ozersay and ‘prime minister’ Ersin Tatar on Varosha which are in violation of UN resolutions.

He said CBMs must concern the substance of the problems faced by Cypriots and not just remain symbolic.

“I reiterated my two proposals on Famagusta and the opening of the crossings in Pyroi and Kokkina,” he said, as well as the rest of the CBMs he had proposed last February.

Anastasiades said he and Akinci have common ground despite disagreements on serious issues.

“There is also agreement that we cannot solve any differences without dialogue,” he said.

He added that each side reiterated the issues it deems important but that there was good will.

“I stressed to Mr Akinci that for the talks to resume Turkey ought to stop her illegal actions and contribute to the positive climate and help overcome problems concerning her own responsibilities such as guarantees, troops and other important issues,” he said.

Anastasiades and Akinci will meet again in September.