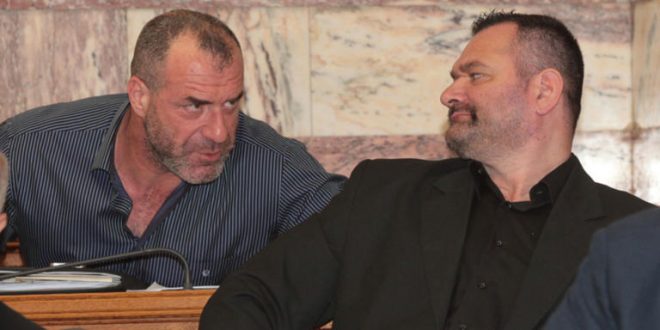 A Golden Dawn member of the European Parliament and a former member of the Greek Palriament were found guilty for the attack at a community center in Ilioupolis suburb of East Athens in 2013.

MPE Yannis Laogs and ex MP Nikos Michos received an 8-nonth suspended sentence for instigating the attack against the center “Synergeio” and its director Panagiotis Drimilis. The privately run center offers among others Greek language lessons to migrants.

The attack was carried out by a group of 20 Golden Dawn members.

Judges rejected the prosecutor’s proposal for their acquittal on the basis of lenient conditions in the new penal code.

Another five GD members were found guilty of causing grievous bodily harm, of possession and usage of weapons. Four of them were sentenced to 11months imprisonment, the firth to five months behind bars.

Two of the total nine offenders were found not guilty.

The sentences were given in the context of the ongoing trail against several members of far-right extremists of Golden Dawn, the party that did not manage to pass the 3% threshold and enter the Parliament in July elections.

Offenders are accused for several criminal acts including the murder of leftist rapper Pavlos Fyssas.