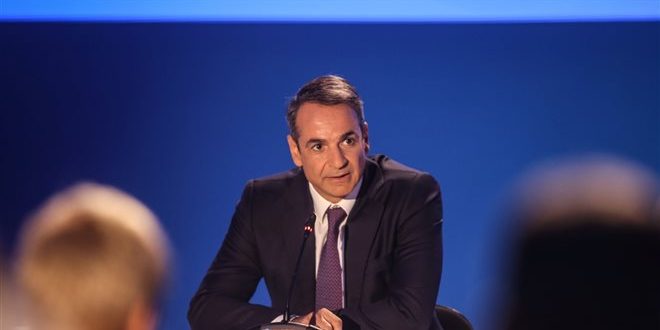 Mitsotakis: EU adopted resolution that Greece must be supported in Migration management

October 18, 2019 Greece, Politics Comments Off on Mitsotakis: EU adopted resolution that Greece must be supported in Migration management 1,867 Views

Prime Minister Kyriakos Mitsotakis said on Friday that European Council adopted a resolution that Greece must be supported in the management of migration flows, at the insistence of the Greek side.

“I would like to emphasize that point 8 of the conclusions wasadded after our urgent intervention. EU support for countries with problems as a result of sudden entries [arrivals],” Mitsotakis told reporters.

“It was agreed that dealing with the issue cannot be left to Greece alone. I explained the initiatives we are taking by changing the policy of the previous government and called for the implementation of a Plan B,” he added.

He said that he did not believe that Turkey would send refugees and migrants to Europe as Ankara has threatened several times. However, he added that the EU has to be ready at any case.

There should be a Plan B to be activated in case of emergency. This Plan should also include the relocation of refugees to other European countries.

He admitted that he did not receive by other Europeans the support he was waiting for, He added that they showed bigger understanding, though.

On the decisions concerning the European Union’s budget, Mitsotakis said that any drop in the budget will lead to cutting back on ambitious policies, as most member-states at the summit pointed out. He underlined that Greece cannot accept any cuts in funding for the two key pillars, while describing the European Commission’s agenda for migration, security and climate change as “ambitious.”

The prime minister, after noting the European Council’s decision condemning Turkey’s military operation in Syria and demanding an immediate ceasefire, noted that the Council adopted a resolution that Greece must be supported in the management of migration flows, at the insistence of the Greek side.

The European leaders also condemned Turkey’s illegal drilling activity in the Cypriot Exclusive Economic Zone (EEZ) and adopted the decision of the EU foreign ministers’ council for sanctions against Turkey, he said.

He described as “mistake” the withdrawal of U.S. from Syria.

Mitsotakis also told reporters that he had had no contact with the North Macedonia’s prime minister, Zoran Zaev, while the latter was in Brussels.

He repeated that he would not raise issues relating to the Prespa Agreement – even if this was problematic – in connection with North Macedonia’s progress toward EU accession.

He stressed, however, that the terms of the agreement must be fully met and any pending issues, such as trade names, etc must be resolved.