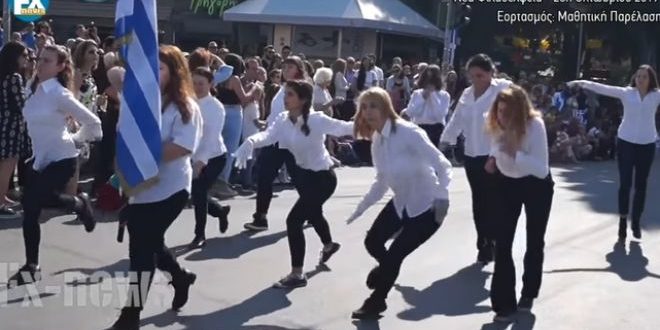 Ministry of Silly Walks at an Athens Ochi Day parade

Another 28th October parade marking Greece’s entry into the Second World War and another controversy. Not a year goes by without some parades, and the behaviour of marchers or onlookers, grabbing the attention of the media.

In this case, it’s the parade that took place in the municipality of Filadelfeia-Chalkidona in Athens that has created a hullabaloo.

In video clips that have flooded the internet, a group of young women can be seen “parading” past the assembled dignitaries on the stage.

But unlike other student groups, they are clearly mimicking Monty Python’s “Ministry of Silly Walks” sketch.

It’s unclear who the “silly walkers” were. It has not been established whether the group were schoolgirls or were outsiders who “infiltrated” the school parade to make their point.

Not everyone is amused. Local mayor Giannis Vouros took to Facebook to refer to the group as “a small portion of ridiculous subjects mocking and offending the memory of the fallen Greeks of the epic year of 1940”, adding that the process of identifying the women has begun.

The video has generated much comment on social media, with people on the right saying the action denigrated the memory of Greece’s war dead and those on the left applauding the women for highlighting the farce of making children march like soldiers.

Others have asked what is worse? Schoolchildren in the northern city of Katerini chanting “Katsifas, you live and guide us”, referring to Konstantinos Katsifas, an extreme Greek nationalist who was killed in a gunfight in southern Albania last year after opening fire on Albanian police with an AK47, at their parade? Or silly walks?

In a letter to daily Efimerida ton Syntakton, the ten girls who staged the Silly Walks explained the event as a protest against “militarism and war.”

“We were unstrung little soldiers, short-circuited to the orders, the calls and the military marches, maybe because we are no longer convinced by the ideas that all these represent, that are embodied in them all,” they wrote.

They stressed that they very consciously choose this particular municipality for their “artistic event” because it is “a neighborhood built by refugees, the most unwanted and the underdogs of the Greek society then and now.”

The suburb Nea Filadelfia emerged in order to host Greek refugees from Asia Minor after 1922.