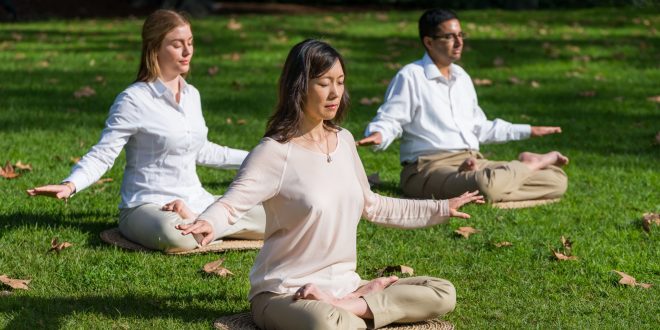 Greek police detained two women and two men and took them to Greek Police headquarters last Sunday. Why? They were meditating in a public park, Eleftherias Park, next to the Music Hall in downtown Athens.

According to their statements, police not only prevented them from performing Chinese meditation excessive “Falun Dafa.” Without further details, they took them to police headquarters.

“We have orders, follow us to the headquarters,” police reportedly said.

“We have been doing this exercise for the last 15 years at the same spot. there was never the slightest problem. We told authorities to cancel the exercise in order not to be detained but their  response was: “Our orders are detention,” Karapanou told EfSyn.

Tzokas added s that “one police officer, who saw that all this was unreasonable, contacted his superior to avoid detention, but his efforts failed.”

Ghana stressed that what happened was “stupid and meaningless since we were not even asked what we were doing during our staying in the HQ.”

But the mysterious reasons for the detention were kind of solved: Chinese President Xi Jingjong was about to arrive in Athens and police was on high alert to prevent Chinese dissidents stage a protest or something. At the same time, several athletes from China were participants in the Authentic Marathon and would run along the park, the detainees suspected.

“There was obviously an intervention by the Chinese Embassy” and that’s why they were released, the four detainees told the daily.

What is so dangerous about Falun Gong or Falun Dafa, the Chinese religious spiritual practice that combines meditation and qigong exercises with a moral philosophy?

The practice initially enjoyed support from Chinese officialdom, but by the mid to late 1990s, the Communist Party and public security organizations increasingly viewed Falun Gong as a potential threat due to its size, independence from the state, and spiritual teachings. By 1999, government estimates placed the number of Falun Gong practitioners at 70 million.

“Falun Gong (or Falun Dafa) is an ancient cultivation of the mind and body based on the principles of Truth, Goodness and Tolerance. For the last twenty years it has been prosecuted in China: the practice has received slanderous publicity, and practitioners face arrests, torture and even killings with removal of vital organs, which are reportedly used for transplants in Chinese hospitals,” the meditation group in Athens said.

“it is not the first time that activities of Greek Falun Gong practitioners have been canceled after intervention by the Chinese embassy,” the four stressed to efsyn. ​​

I don’t know if they were whistling any political message while in the park or had any banner in Chinese.

PS What “is Greek to” non-Greek speaking foreigners, it is apparently -and literally – “Chinese” to Greek police. After all, we have this idiom in Greek “αυτά μου ειναι Κινέζικα” for “It’s gobbledegook.“