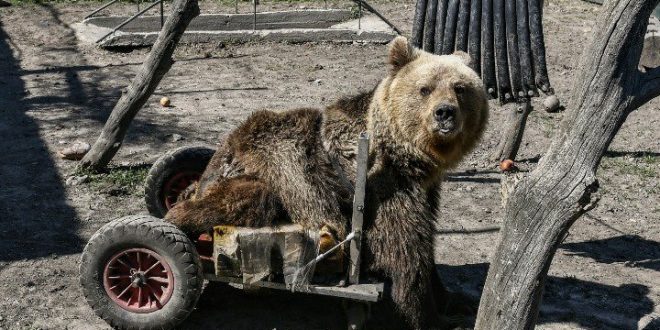 Usco, the famous little bear on wheelchair, passed away

November 29, 2019 animals Comments Off on Usco, the famous little bear on wheelchair, passed away 479 Views

Usco, the famous little bear on a wheelchair, passed away earlier this week succumbing to kidney failure. Usco was the first bear in the world that used a wheelchair and a rare case of wildlife using such a device.. Cub Usco was found injured and with a broken spine next to his shot mother in a forest four years ago. He was rescued by the Greek NGO for the Protection of Wildlife Arcturos.

He was diagnosed with kidney failure and his health deteriorated with a few days. He died on November 25.

“The kidney failure had nothing to do with Usco’s disability and despite his problem, Usco showed enormous will to live”, Panos Stefanou, responsible for Public Relations in Arcturos, told the news agency amna.

Usco was found injured in the woods next to his mother that was shot and killed. The cub was transferred to Greece in July 2015. He was sent to the veterinarian school of Aristotle University of Thessaloniki where the doctors found that it had a broken spine and would never be able to walk.

Even if the odds were against the cub, the vets saw in Usco an enormous will to live. They  decided to try to make a wheelchair specially made for his needs. It worked and Usco would freely move around.

Usco adapted to the new conditions. As he grew up, he changed three different wheelchairs.

Arcturos had established a special place where Usco could move freely and in safety. A small pool offered him hours of pleasure and the same did specially designed toys.

“A life-fighter, a bear model for everyone and a symbol of will,” Arcturos wrote in a statement announcing Usco’s death. “Disability in his hind legs was not an obstacle, did not limit his willingness to live and play.”

Usco was loved by thousands of people in Greece and abroad. His story and the power with which he encountered the difficulties touched the souls of young children, in particular. Ussko became their favorite bear, they sent him treats and painted portrait, they asked for his news, they were inspired by his determination.

“Usco was an example even to all of us at Arcturos. In his short life, he has taught us the beauty of diversity and the importance of fighting and not giving up, even if everything around you seems difficult and impossible,” the NGO wrote.