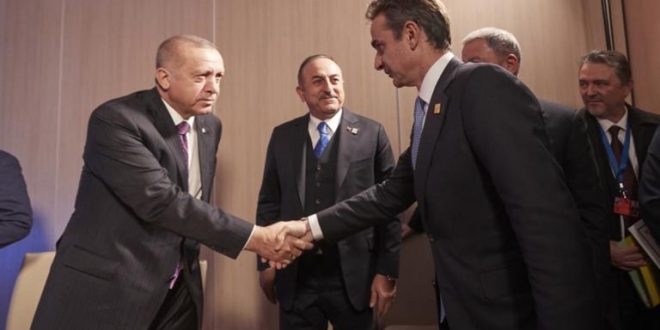 London meeting: Mitsotakis and Erdogan agree that they disagree

December 4, 2019 Greece Comments Off on London meeting: Mitsotakis and Erdogan agree that they disagree 2,786 Views

Frozen faces, tense smiles, ice-cold hands: Strangers in the room where Greeks and Turkish delegations met in London on the sidelines of the NATO Summit. The meeting between Greek Prime Minister, Kyriakos Mitsotakis and Turkish President,Tayyip Erdogan, including Foreign and Defense Ministers from both countries lasted exactly 1.35 hour. 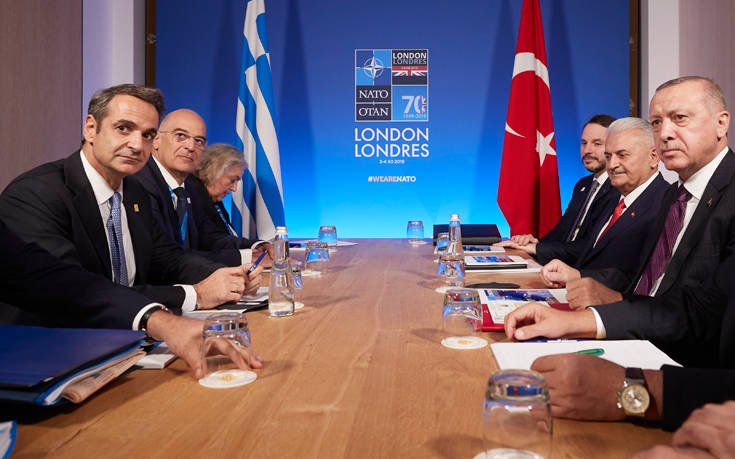 The two sides left the room with the same facial expression as they entered. It was more than obvious: Greece and Turkey had agreed that they disagree.

The meeting was requested by the Turkish side and took place in the shadow of the latest provocations by Greece’s neighbor: the controversial deal with Libya and the published maps that eliminate maritime zones form several Greek islands.

Short after the meeting, PM Mitsotakis told reporters that he had an open discussion with the President of Turkey.

“I have put on the table all the issues arising from the latest Turkish actions. Disagreements on both sides were recorded. The two sides, however, agreed to continue discussions on the Confidence Building Measures,” Mitsotakis said.

He added that he instructed the Minister of Foreign Affairs to convene the Supreme Foreign Policy Council in order to inform all political.

“I want to assure the Greek people that there have been, are and will be difficulties in relations with Turkey. But I think that if both sides show good will, these difficulties can eventually be overcome,” the Greek PM concluded.

According to media information, Mitsotakis told Erdogan that the “Turkey-Libya Agreement is not only legally void” it also adds degrees of complexity to a troubled neighborhood.”

The Greek side reportedly told Erdogan that the Libyan Parliament had already rejected the agreement.

During the meeting, the Refugee issue and the migrants’ returns was extensively discussed. Mitsotakis reportedly pointed out at Erdogan that there has been a change in Turkey’s attitude lately, as the Turkish port authorities do not respond to Greek requests for the collection of migrants leaving the Turkish coast.

So far, there is not a word about the meeting on the Turkish side.

Earlier and while addressing the NATO leaders, Mitsotakis brought up Greece’s tensions with Turkey and stressed that “relations among the member states of the NATO alliance must be characterized by unity and solidarity.”

He stressed that “alliance members have the responsibility to respect these notions and act upon them, and must also steer away from actions that could give rise to friction and tensions among allies and neighbors.”

With regards to the Turkey-Libya maritime boundaries memorandum, he said that “encouraging international agreements which blatantly violate international law and the legal rights of NATO’s members run against the spirit of collaboration and the alliance’s fundamental principles.”

He noted that Greece expects its neighbors to show respect for its sovereign rights, and to abstain from actions and statements that endanger neighborly relations and regional security.”