Breaking News
Home / News / Society / Very Mix / Why does the Christmas Tree of Athens lean to the left? (video) 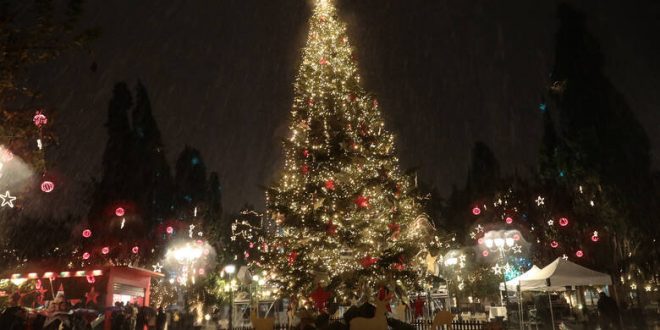 Why does the Christmas Tree of Athens lean to the left? (video)

Hours after the illumination of the Christmas Tree in Athens, the 17-meter-tall natural fir from Karpenisi started to lean.. to the left when one look at it from Syntagma Square with the building of the Greek Parliament in the background.

Is there some political message the tree want to send to the right-wing government and the Mayor of Athens? Or did the left-wing opposition put a spell on it?

Thursday morning, when the unprecedented case of the leaning Christmas tree, the jewel of Athens over the holidays, was featured at TV magazines, it was claimed that the fir leaned due to the stormy winds on Wednesday night.

Municipality workers were on the spot trying to figure out why the tree is not standing upright. They found out that the Christmas Tree of Athens was not leaning but it was simply much too tall…

Anyway, when the inspection concluded, municipality sources told media that the tree is leaning because it is a natural tree [!?] A very tall natural tree that cannot be totally upright.

We all know, though, that the fresh and natural firs in our Christmas living rooms lean when 1) someone failed to correctly hit a nail right in the wooden base or b) the bottom of the fir has not been evenly cut or  c) the fire has decided to run away and back to the forest.

Of course, we do not set 17-meter-tall firs inside out homes.

Anyway, some Athenians found comfort in the thought that also the Tower of Pisa is leaning.

PS and here is another occasion to learn a Greek proverb: ή στραβός ειναι ο γιαλός ή στραβά αρμενίζουμε – either the shore is awry or we sail awry.